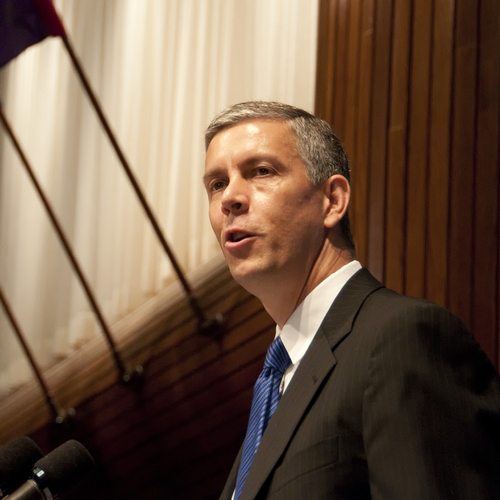 The Nation’s Dave Zirin makes an important observation about the challenge to the National Collegiate Athletic Association raised by Northwestern University football players: the “issue of the NCAA is a racial justice issue.” Zirin cites the civil rights historian Taylor Branch, who has written that the NCAA has the “whiff of the plantation,” and Harry Edwards, who calls the issue of compensating university athletes as “the civil rights movement in sports of our time.” He makes the obvious point that the majority of players in the top revenue-generating sports in college—football and basketball—are African-American. That explains Bill Maher’s quote that the NCAA reflects a core principle of the American economy: “making tons of money off the labor of unpaid black people.”

It is remarkable how the media and society overall have tiptoed around the racial implications of the success of the Northwestern University football team, led by quarterback Kain Colter, in winning the approval of a regional director of the National Labor Relations Board of the right of university athletes to unionize. By the same token, that tiptoeing also avoids questioning the racial dimensions inherent in the virulent opposition of the NCAA and Northwestern University to the students’ labor organizing.

That isn’t to say that the NCAA or Northwestern are behaving in a manner that is overtly or intentionally racially discriminatory, but the result disproportionately affects African-American student-athletes. How odd, then, that David Gregory’s Meet the Press discussion of the NCAA’s student-athlete policies had NCAA President Mark Emmert face off against President Obama’s Secretary of Education, Arne Duncan, who in his youth played basketball for Harvard, and President Obama’s personal aide, Reggie Love, who once played football and basketball at Duke. Neither Duncan nor Love has been an activist taking on the NCAA and its member schools on treating their athletes as employees who merit labor protections.

Duncan declared himself personally involved in the issue of the employee rights of college athletes, noting that he grew up playing “in the inner city on the South Side of Chicago.” On the show, Duncan called for a “middle ground” between the NCAA and the student organizers, but his middle ground suggestion was nothing short of pathetic: “Making sure students are fed, making sure if there’s an emergency at home and mom gets very sick or dad passes away, they have an ability to get home to attend the funeral.”

If Emmert wasn’t laughing up his sleeve at that whopper, he must have no sense of humor at all. Compare Duncan’s “middle ground” with the issues that the student organizers have raised:

Was Duncan even aware of what Colter and his Northwestern University football teammates were asking for?

More troubling is the notion that Duncan’s middle ground reflects a potential buy-in of the Obama administration to the NCAA’s and the universities’ anti-union stance. Remember that the NCAA invented the term “student-athlete” and mandated universities use it decades ago intentionally because they didn’t want the athletes to be considered employees. Duncan’s position on “school choice” has made the Obama administration frequently seem hostile to teacher unions that dislike its all-out support of non-union charter schools. Is Duncan’s weak-kneed position on the NCAA’s opposition to university athletes’ union organizing a reflection of the Obama administration’s tone-deafness to the College Athletes Players Association’s (supported by the United Steelworkers) labor credentials and meaning?

No one need charge Emmert, the NCAA, or Northwestern with racial animus in their opposition to Colter and his co-workers in their advocacy for the right to organize a union for college athletes. But the impacts on athletes who are predominantly African-American in the biggest revenue-generating college sports are hard to ignore. The American public’s response demonstrates the racial divide. In an opinion poll conducted by ABC News and the Washington Post, 51 percent of people of color favored compensating college athletes, while 46 percent opposed. But among whites, only 24 percent supported compensating athletes, compared to 73 percent opposed; 60 percent of people of color supported the right of college athletes to organize a union, but 56 percent of whites opposed it. The Northwestern football players have created a dynamic that connects labor organizing and the rights of people of color. The NCAA, Northwestern University, and Arne Duncan just don’t get it.—Rick Cohen