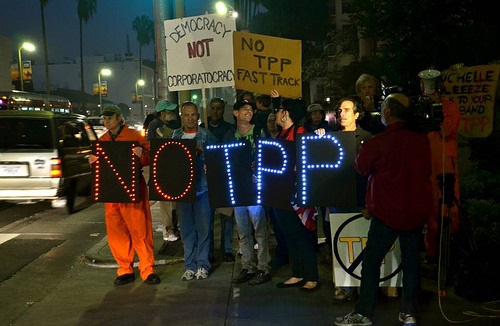 At the Council on Foundations annual meeting this past week, former House Speaker Newt Gingrich cited his work with the Clinton White House in getting NAFTA enacted as evidence of the ability of both parties to work together. Free trade pacts as a possible venue of bipartisan collaboration might not work quite as well today as they did nearly a quarter-century ago between Republicans and Democrats—or even between Democrats and Democrats. Although some congressional Republicans and Democrats are working cooperatively to get the Trans-Pacific Partnership treaty completed and approved by giving the President “fast track” authority, Zach Mitcham, the editor of the Madison County Journal, was reminded of the late comedian George Carlin’s quip: “Bipartisanship usually means that a larger-than-usual deception is being carried out.”

NAFTA probably isn’t a great example of free trade bipartisanship for Gingrich to cite, as many Democrats and much of organized labor think that NAFTA didn’t quite pan out as President Clinton said it would. “Over and over again, we’ve been told that trade deals will create jobs and better protect workers and the environment,” said Senator Bob Casey (D-PA). “Those promises have never come to fruition.”

That isn’t stopping President Obama, who has been raising the stakes for support of his 12-nation Pacific trade deal—and sparking the ire of many of his politically progressive allies. In a speech to the Organizing for Action group that grew out of the Obama campaign’s Organizing for America, the president was none too kind to the opponents of his free trade agenda, “When people say this trade deal is bad for working families, they don’t know what they’re talking about,” the president said. “I take that personally. My entire presidency has been about helping working families.”

The president also compared claims about the lack of transparency in the trade agreement to Sarah Palin’s charge that the Affordable Care Act contained requirements for “death panels.” His actual statement was a little worse than that, couched in language that reflected his displeasure with the critics:

“Now, some of these folks are friends of mine. I love them to death. (Laughter.) But in the same way that when I was arguing for health care reform I asked people to look at the facts—somebody comes up with a slogan like ‘Death Panel,’ doesn’t mean it’s true. Look at the facts. The same thing is true on this. Look at the facts. Don’t just throw a bunch of stuff out there and see if it sticks.”

Where’s the nonprofit angle in this? It is the relationship of the president to ostensibly independent nonprofits. Organizing for Action is the 501(c)(4) successor to Organizing for America, which was part of the Obama election campaign. Its website URL is none too subtle: barackobama.com. On the website, OFA’s seven issue priorities do not include free trade, and even within the description of the issue most likely to reference trade, “economic opportunity,” the word “trade” doesn’t appear.

In a second speech to OFA, at the OFA dinner that followed the OFA summit where he issued his “death panel” comparison, the president joked about OFA’s independent identity: “What OFA has been able to accomplish so that now it’s no longer about reelecting me—it never technically was, but—(laughter)—or moving our agenda forward—but I just wanted to make that point.”

Writing for the New Republic, Danny Vinik suggests that the actual impact of the Trans- Pacific Partnership is, at this moment, unclear—probably not as big and good as the free-traders suggest, but not as big and bad as TPP opponents fear. What’s really at stake is beyond the specifics of the TPP. It’s a question of the trustworthiness of government and the transparency of the government’s relationships with the big corporate interests that increasingly dominate government, regardless of the political parties occupying the White House and Congress.

The president’s rallying of OFA to line up behind the TPP and fast-track trade authority contains echoes of the formation of the previously unknown Progressive Coalition for American Jobs, the ostensibly progressive coalition that has endorsed the president’s trade position. OFA’s presumed independence from the president is pretty thin, its openness about whether it has a specific position on trade is hard to determine, and its connection to the formation of PCAJ palpable (notably through the involvement of Mitch Stewart, who was in 2013 announced as the first director of Organizing for Action). As the president looks to OFA to rally to his TPP position, which seems a signpost for the president’s increased isolation from other political progressives on the issue of this trade deal, it weakens OFA’s ability to be credible in the independence of its community organizing around its core issues of climate change, immigration reform, expanding equality, preventing gun violence, health care, women’s issues, and economic opportunity.

What is happening to the president’s position, and potentially to OFA, is that the trade pact is  is about more than trade. It is about governance. Mitcham writes the following:

“On matters of big money—of true clout—the two parties are more alike than different. And we’re all going to pay for an increasingly rigged game. The fact that there’s bipartisan support for a secretive deal like this should alert you to the fact that you’re not being adequately represented…If this was on the up and up, we could speak up on the details of what’s in the deal and be heard and fairly considered on each point. That’s how our government is supposed to work, right?”