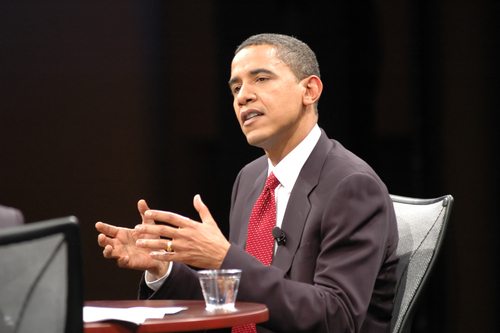 Rolling Stone got an interview with President Obama before NPQ did, sad to say. We perused an early copy of the interview, to run in a May print edition of Rolling Stone, for comments on issues we have covered in the NPQ Newswire.

President Obama on race: “Look, race has been one of the fault lines in American culture and American politics from the start. I never bought into the notion that by electing me, somehow we were entering into a post-racial period. On the other hand, I’ve seen in my own lifetime how racial attitudes have changed and improved, and anybody who suggests that they haven’t isn’t paying attention or is trying to make a rhetorical point…My view on race has always been that it’s complicated. It’s not just a matter of head—it’s a matter of heart. It’s about interactions. What happens in the workplace, in schools, on sports fields, and through music and culture shapes racial attitudes as much as any legislation that’s passed.”

President Obama sidestepping a direct question on marriage equality: “I’m not going to make news in this publication. I’ve made clear that the issue of fairness and justice and equality for the LGBT community is very important to me. And I haven’t just talked about it, I’ve acted on it…Ending ‘don’t ask, don’t tell’ has been the dog that didn’t bark. You haven’t read a single story about problems in our military as a consequence of the ending of the policy. So whether it’s on that, or changing the AIDS travel ban, or hospital visitation rights, or a whole slew of regulations that have made sure that federal workers are treated fairly in the workplace, we’ve shown the commitment that I have to these issues. And we’re going to keep on working in very practical ways to make sure that our gay and lesbian brothers and sisters are treated as what they are—full-fledged members of the American family.”

President Obama on Occupy Wall Street: “You know, I think that Occupy Wall Street was just one vivid expression of a broader anxiety that has been around in the United States for at least a decade or more. People have a sense the game is rigged, so just a few people can do well, and everybody else is left to scramble to get by…The free market is the greatest generator of wealth in history. I’m a firm believer in the free market, and the capacity of Americans to start a business, pursue their dreams and strike it rich. But when you look at the history of how we became an economic superpower, that rugged individualism and private-sector dynamism was always coupled with government creating a platform so that everybody could succeed, so that consumers weren’t taken advantage of, so that the byproducts of capitalism, like pollution or worker injuries, were regulated. Creating that social safety net has not made us weaker—its made us stronger…One of the major arguments we’ll be having in this election season is a contrasting vision that says not just that government is part of the problem, but essentially that government is the entire problem. These guys, they don’t just want to roll back the New Deal—in some cases, they want to go back even further.”

President Obama on the Keystone pipeline: Jann Wenner Rolling Stone’s publisher, who conducted the interview with the president, noted that “James Hansen, NASA’s leading climate scientist, has said…that if the pipeline goes through and we burn tar sands in Canada, it’s ‘game over’ for the planet.” Obama responded: “(I)t’s important to understand that Canada is going to be moving forward with tar sands, regardless of what we do. That’s their national policy, they’re pursuing it…The reason that Keystone got so much attention is not because that particular pipeline is a make-or-break issue for climate change, but because those who have looked at the science of climate change are scared and concerned about a general lack of sufficient movement to deal with the problem…(I)t’s been easy for the other side to pour millions of dollars into a campaign to debunk climate-change science…I will be very clear in voicing my belief that we’re going to have to take further steps to deal with climate change in a serious way. That there’s a way to do it that is entirely compatible with strong economic growth and job creation…”

What one question would you most like to put to President Obama? Leave a comment below and let us know.—Rick Cohen