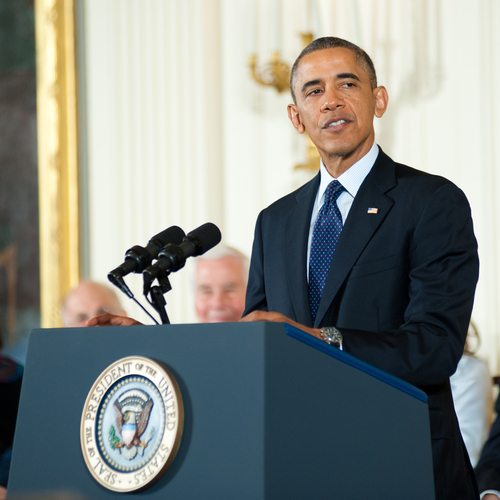 Tina Sticka of Billings, Montana was receiving all of $264 a week in long-term unemployment benefits until December when the program ended before her joblessness did. Her husband is a seasonally employed landscaper, currently unemployed until his work starts back up in April. He gets $254 a week in benefits. Sticker is one of the 539 Montanans who lost emergency long-term benefits when Congress passed a budget without an extension of those benefits.

If you were President Obama, the failure of Congress to extend long-term unemployment benefits might have struck a crippling blow to your administration’s ability to aid people like Tina Sticka, who have been unemployed for what to them must seem like forever and a day. Most states typically offer up to 26 weeks of unemployment benefits. The extended unemployment benefits that Congress failed to renew had made available up to another 47 weeks as an emergency response to the Great Recession. When Congress failed to act, 1.4 million unemployed persons lost vital sources of income as they looked for nonexistent jobs.

But don’t think that meant that only 1.4 million people were classified as long-term unemployed. That was only the number of people who would lose their benefits with the expiration of the 26-plus-47 weeks. The December 2013 report of the Bureau of Labor Statistics counted 3.878 million people who had been unemployed 27 weeks or more—more than one-third of all unemployed persons, though in some states, such as Florida, New Jersey, and the proto-state of the District of Columbia, the long-term unemployed comprise half of all unemployed job seekers. That statistic, however, counts only people who are still in the labor force; that is, people still looking for jobs. The BLS will count people as long-term unemployed people still in the labor force for up to five years. In all probability, the decreasing labor force participation rate, in December down to 62.8 percent, lower than at any time in this decade, is partly attributable to unemployed people simply giving up the job search.

So, in President Obama’s shoes, what might you do with a purported economic recovery that appears to be leaving millions of jobless people by the wayside and, due to Congressional inaction, without long-term unemployment benefits? Last Friday, the President convened top corporate executives at the White House to announce that he had persuaded 300 large corporations, including 21 of the top 50, such as Wal-Mart, Apple, Bank of America, Morgan Stanley, General Motors, and Ford, among others, to adopt new guidelines that would not discriminate against the long-term unemployed in their hiring practices. Even President Obama’s bête noire, Rupert Murdoch, on behalf of 20th Century Fox and News Corp., signed on to the recommended best practices.

The problem is well known. The longer one is unemployed, the less likely one is to appear as an attractive job applicant to many employers. The new guidelines are voluntary “best practices” for corporations, though the president issued an “executive memo” that the federal government would abide by the same hiring guidelines.

Remember, during his State of the Union address, the president vowed to use any and all tools he could to achieve his policy goals. He called on Congress to extend long-term unemployment benefits, though Congress had only failed to agree on a compromise deal just before he delivered his speech. However, this tool is only a voluntary promise by companies not to discriminate against job applicants who have large blank spots of unemployment in their work histories. It doesn’t mean new jobs. It doesn’t even guarantee that the companies’ voluntary endorsement of these best practices will lead to their recruitment staff actually rebalancing their thinking about these job applicants. It is only, as the White House put it, a commitment to give the long-term unemployed a “fair shot.”

Anything in this tool for nonprofits? For one, nonprofits might be well advised to contact the participating corporations and structure ways of introducing the long-term unemployed that they serve to these employers. Turning a nonprofit eye on these voluntary corporate pledges increases the possibility that some of these corporate employers might actually do something.

The president also announced a $150 million Department of Labor grant program for public-private partnerships to help prepare and place the long-term unemployed in jobs. As described in a White House fact sheet, these “Ready to Work Partnerships” will tap $150 million from Labor’s H-1B Fund to support “high performing partnerships between employers, nonprofit organizations, and America’s public workforce system.” The mid-February grant solicitation will call for programs that focus on recruiting and employing the long-term unemployed, that emphasize work-based training such as on-the-job training and internships or apprenticeships, and that involve employers that make commitments to truly consider hiring qualified applicants.

It is an interesting use of the H-1B Fund, originally funded by user fees paid by employers of immigrants with H-1B visas, which was designed to “provide education, training, and job placement assistance in the occupations and industries for which employers are using H-1B visas to hire foreign workers.” $150 million isn’t a huge appropriation compared to the magnitude of the need.

You’re the president. Congress has deprived over one million people of long-term unemployment benefits of a few hundred dollars a week. There are millions more who probably qualify. What would you do?—Rick Cohen