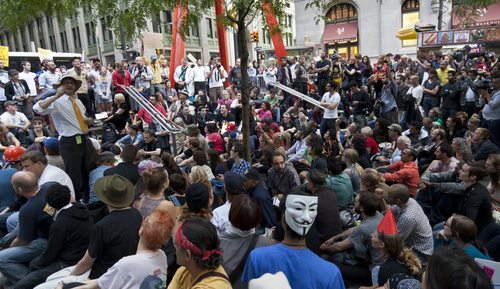 Nonprofit Quarterly has published several articles trying to draw lessons from the Occupy Wall Street experience. In the upcoming print issue of The Nation, with much of it published online, Leah Hunt-Hendrix and Max Berger, both organizers, believe that their involvement in OWS effort taught them “it was possible to build a revolutionary movement against the corrupt capitalist economy and oligarchic political systems.”

It isn’t clear that most nonprofit organizers view themselves as revolutionary activists and are prepared to tell their wealthy funders that they want to eschew the benefits they receive from capitalist wealth generation. At a recent gathering of experts on social enterprise, supporters and critics alike all pledged their allegiance to the capitalist economic system, but no one can deny that the economic system that generates philanthropic wealth also generates deep and persistent economic inequities that many nonprofits are pledged to address.

Their suggestions for a “credible revolutionary strategy has three parts: alternative institutions that create examples of the kind of society we want to live in; social movements that mobilize popular resistance by opposing the corrupt institutions currently in power; and independent political organizations that enshrine progressive victories in law.”

For alternative institutions, they call for democratic control of banks, worker and community “say” in corporate operations, and community control of land. They call for “shifting the endowments of foundations and universities away from investment in fossil fuels and private prisons and into a renewable economy owned and operated by communities, with members accountable to each other and to future generations.”

For social movements, they argue against organizing campaigns that have “closed, hierarchical structures” (oddly pointing to “unions that can’t go on strike” as an example, rather than some of the very hierarchical organizing networks that have been powerful recently, such as ACORN) and “horizontal mobilizations that fall apart quickly and don’t have a coherent strategy” (here, they point to Occupy as the example). But the model they suggest is to learn from the resistance movements linked to the Arab Spring and the “color revolutions” of Eastern Europe, which they say “succeeded in overthrowing authoritarian regimes by combining structure and mobilization in a hybrid model that could escalate militantly and had a plan to win.” They explain that the lack of an organization that could take power after the successful mobilization against the Middle East dictators is what led these successful movements to lose the revolution.

For that “independent political formation with a lasting base that can take power and win reforms,” Hunt-Hendrix and Berger point to the model of the Working Families Party in New York, which they see as an entity “to build…power through electoral and issue organizing do the dirty work of negotiating with other political forces.” Although frequently working with the Democratic Party, the WFP exists outside of it, running candidates inside and out, similar to how the Tea Party activists gained influence within the Republican Party.

The advent of the Tea Party has dragged the Republican Party to the right. Evidence that the Occupy movement has pulled the Democrats to the left is hard to spot. It is intriguing, nonetheless, that Occupy activists see the Tea Party’s role with the Republican Party as something of a model for progressives trying to influence the Democrats.—Rick Cohen