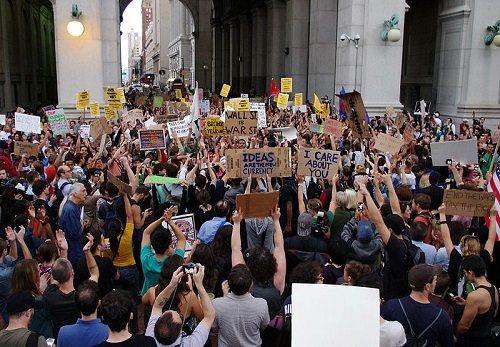 If you’ve ever participated in an anti-war march, you’ve probably wondered how the marchers ended up including a raft of fringe groups and causes. Veterans of civil rights actions or anti-war protests might have been flustered by the tendency of some in the press to focus on the wingnuts in a way that would dilute the core protest message and undermine the coherence and legitimacy of most of the marchers. Typically, after grafting themselves into the parade, the fringe groups would return to whatever it was that kept them occupied and the movement would continue. But what about a protest action that lasted not for one demonstration, but weeks or months?

Writing for The Public Eye, published by Political Research Associates, Spencer Sunshine has produced a report on the right-wing infiltration of the Occupy Wall Street movement. Sunshine documents the attraction and participation of anti-Semites, white nationalists, and Nazis (demonizing Wall Street as “Jewish bankers”), conspiracists (such as 9/11 “Truthers”), Lyndon LaRouche followers (pushing for a restoration of Glass-Steagall), Ron Paul acolytes (seeing Occupy as an instrument in their campaign to “End the Fed”), and others, including Tea Party activists.

Easily the most obnoxious example Spencer cites is the endorsement of Occupy by former Louisiana state representative David Duke, a well known white supremacist. In a 2011 video, Duke called for an “Occupy Zionist Wall Street,” condemned the “Zionist thieves at the Federal Reserve,” and denounced “the Zionist Goldman Sachs, run by that vulture-nosed bottom feeder, Lloyd Blankfein.” Duke was hardly the only one of his ilk to encourage his followers to infiltrate to get their messages heard. Sunshine notes that even the leader of the American Nazi Party, Rocky J. Suhayda, encouraged his people to participate in Occupy and distribute “flyers explaining the ‘Jew Banker’ influence,” though suggesting they not wear their Nazi paraphernalia to Occupy gatherings.

Sunshine would undoubtedly take issue with our use of the term “infiltrating” in this piece. “It is a mistake to view these right-wing groups and people as ‘infiltrating’ Occupy,” Sunshine writes, “since in some cases they supported and helped organize it even before it started.” That might be true, except that the open structure of the Occupy movement was virtually an invitation to right-wing extremists to participate at the beginning and throughout its existence. Sunshine notes that Occupy was a demonstration or movement “that proclaimed that it was open to everyone and refused to define even its most basic concepts or demands.” That anarchic approach, not only within Occupy encampments like Zuccotti Park, but with the “franchise activism” of other communities declaring themselves part of the Occupy movement, meant that anyone could join up and feel free to espouse whatever they wanted so long as they said that they supported the 99 percent and attacked Wall Street and the One Percent.

One scary dimension of the right wing’s participation is the way the right’s conspiracy theories resonate with the left’s. The participation of 9/11-Truthers in Occupy has been a longstanding problem in the left, with many prominent progressives having signed the 2004 statement that suggested that President Bush had prior knowledge of the attack on the World Trade Center, and although some have recanted (or said that they hadn’t read the statement closely), others have stood by their signatures. More widespread, it seems, were the “End the Fed” conspiracists from the right, finding open minds on the left to hear their Federal Reserve theories. For a subset of Occupy participants, conspiracy thinking took the place of political analysis.

Overall, Occupy never had a platform, never articulated a strong set of principles or demands, and in fact actively eschewed attempts to be specific and concrete. During the heyday of Occupy and after its demise, some activists pitched a “left-right alliance” based on the presumed commonalities of Occupy’s left and the Tea Party’s right (presuming, one guesses, that Nazis, anti-Semites, and white nationalists wouldn’t be in the Tea Party mix). Nonetheless, that became an open door to the right wing, who were motivated by some of the same grievances as the Occupiers but proposing solutions that, had the Occupiers dug deeply, would have proven completely objectionable. While some of the examples cited by Sunshine of right-wing involvement in Occupy seem a little tangential, he has identified a problem built into the populist, leaderless structure of a progressive movement like Occupy.

Sunshine thinks that some of the right-wing involvement might have been fended off had Occupy administrators early on issued and endorsed an “anti-oppression” statement (as Occupy Boston did) identifying the types of oppression that would not be countenanced in the movement, such as Islamophobia and anti-Semitism, or adopted (as Occupy Wall Street did, late in the process) a policy of banning postings on the Occupy forum about LaRouche, Duke, and certain others.

Nice thoughts, but statements about oppressions and prohibitions against well-known extremists are not enough. If the Occupy movement—as well, perhaps, as the somewhat leaderless populist movements in the Arab world and more recently in the Ukraine— demonstrate anything, it is the importance of having well-thought-out platforms with specific demands in order to stave off being hijacked by extremists. An open door to anyone who articulates the same grievances as other protesters without anything more specific as solutions to advocate equates to an invitation to reactionaries, wingnuts, and lunatics. There are probably plenty of left-right alliances worth pursuing, but not with left-right conspiracists, racists, and anti-Semites.—Rick Cohen