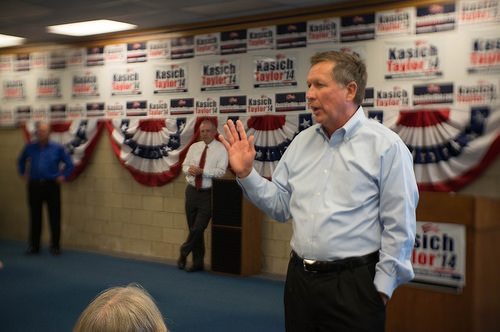 On Thursday, Ohio Gov. John Kasich who has long supported a charter school movement in that state, acknowledged that those schools were, in fact, in trouble and needed a tougher set of rules. Statewide the charters significantly underperform public schools. According to a recently released study from Stanford University Center for Research on Education Outcomes (CREDO) students in charters average the equivalent of 36 fewer days of learning in math and 14 fewer days of reading than students in traditional public schools. This prompted the following comments from Macke Raymond last week about the inadequacy of the free market approach to education.

“What I think this says for the policy environment, is that a lot of these legislation, enabling charter schools, were drawn up at a time when people had really, really strong confidence in the power of markets. And I have to say this is one of the big insights for me because I actually am kind of a pro-market kind of girl, but it doesn’t seem to work in a choice environment for education.

“I’ve studied competitive markets for much of my career, that’s my academic focus for my work, and it’s the only industry-slash-sector where the market mechanism just doesn’t work. I think it’s not helpful to expect parents to be the agents of quality assurance throughout the state. I think there are other supports that are needed—frankly parents have not been really well-educated in mechanisms of choice—and I think that there’s a lot of confusing information that they have to work with.”

“We will not tolerate people coming into this state, making money at the expense of great education for our kids,” Kasich said in a speech to the Ohio Chamber of Commerce. “And the legislature’s going to have to help us on this.” His statement was considered  Ohio’s charter landscape has come in for a lot of criticism lately with Alex Medlar of the pro-charter National Association of Charter School Authorizers declaring that  “Ohio has a real quality control problem,” and then famously, in referring to the unusually large group of charter authorizers, “Ohio’s more broken than the Wild West.”

Jackie Borchardt of the Northeast Ohio Media Group writes. “The comments likely surprised many in the room given Kasich’s and the Republican-controlled legislature’s endorsement of the publicly-funded private schools and charter operators’ history of hefty campaign contributions to GOP coffers.” She goes on to say that Democrats and public education advocates have long been calling for reforms.—Ruth McCambridge