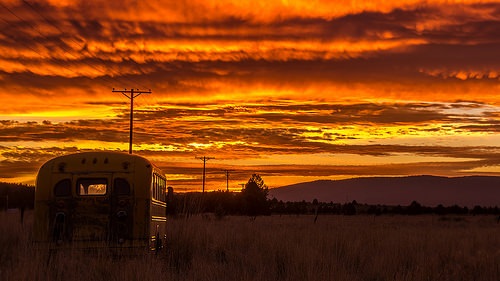 The Alley Theater in Louisville, Kentucky, has a new home on Main Street, but also has a plan to bring theater and other art forms into the community through its Arts Caravan project. The 22-year-old company’s mission is “to produce progressive theater and to provide an affordable venue for both traditional and experimental artists.” Recently, the company purchased three buses that had been destined for the auction block from the Transit Authority of River City for $1. Now comes the hard part: raising the funds to refurbish the buses as mobile arts spaces.

Producing artistic director Scott Davis estimates that it will take $211,110 to renovate the buses and launch the mobile arts program. In 2014, the theater raised about $8,000 for the project, although the campaign only began in earnest this January. The company is looking for donations and sponsorships to support the project. In addition, along with 63 other Louisville nonprofits, The Alley Theater hopes to benefit from the city’s 2015 Brackets For Good crowdfunding effort.

Based in Indianapolis and modeled on the NCAA basketball tournament brackets, Brackets for Good is a 501(c)(3) that allows nonprofits to go head-to-head in fundraising, with single-elimination winners advancing week by week until only one remains. Each nonprofit gets to keep the funds it raises, and the winner receives an additional $10,000. Indianapolis and Louisville each have their own brackets.

Davis knows it will take time to raise the funds to get all three buses rolling into the community with arts programs. “In the most realistic of all worlds, we will have one or two up and operating by the middle of the summer,” he said. The plan is to have one bus with a small stage that attaches to its side, one where the side of the bus folds down to create a large performing space, and a third that would be used to host meetings and arts-based education—all of which should add up to a novel approach to both community outreach and audience development.

This is not the first time NPQ has reported on a nonprofit organization finding a new way to repurpose old buses. Last June, we covered the plans of San Francisco-based Lava Mae to transform old buses into mobile shower facilities for homeless people; since then, Lava Mae has been successful in raising enough funds to offer this important service four days a week. That report also included other examples of old buses being used for new purposes, including as mobile lunchrooms to deliver meals to children who received subsidized school lunches during the summer months and as a bicycle library.

Is this a trend? What other new forms of mobile services are nonprofits delivering in your community, using buses or anything else with wheels?—Eileen Cunniffe

More about: Arts and CultureCrowdfundingNonprofit News