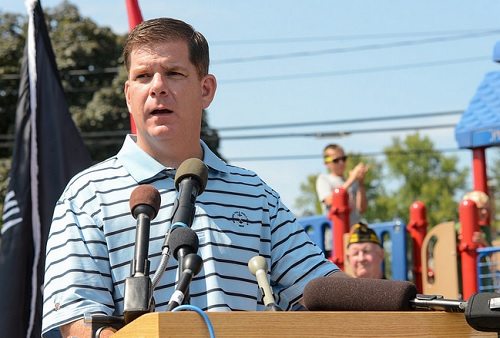 When the Boston Globe’s Michael Levenson noticed that a specific section of the agreement between the City of Boston and the U.S. Olympic Committee prohibited Boston city government employees from publicly criticizing the Olympics and its various organizing committees, the entire community was stunned that Mayor Marty Walsh would sign such an obvious affront to free speech—and why the USOC, a 501(c)(3) public charity, would require a gag provision.

The mayor has at various points described the language as “boilerplate” that every city wanting to bid for the Olympics routinely signs, asserted that it only applied to city staff involved in the Olympics bid, and emphasized that the mayor would never restrict city employees’ free speech. Whatever the changing interpretation, the language imposed by the USOC and signed by the city is troubling:

Mayor Walsh followed all of this with a letter to city staff indicating that they could express any opinions about the Olympics bid that they wanted—on their own time. Unfortunately, all of the alternative explanations don’t match the language of the agreement. One might guess that the USOC provision is an unconstitutional infringement on free speech rights and probably unenforceable, but the facts are that it was part of an agreement with the city and the city blindly signed it. For either or both parties to suggest that the language doesn’t really mean anything is offensive to the concept of free speech valued by public agencies and the nonprofit sector.

In neighboring Cambridge, which would also be part of the regional hosting of the Olympics, four city council members have already weighed in with a resolution that would require the council to see and approve any and all agreements with the USOC. Their resolution specifically cites the “anti-democratic” provisions that Mayor Walsh signed as the basis of their concern. Whether it is enforceable or not, and whether the City and the USOC mean what the agreement says, the USOC language is truly noxious and shouldn’t be ignored as inconsequential. If the USOC thinks that defending the provision as non-disparagement language “typical of contracts between parties,” as USOC spokesperson Patrick Sandusky said in a statement, is sufficient justification of such a blatant and odious contradiction of First Amendment free speech rights, the nonprofit has a serious conceptual deficiency as an institution representing the U.S in the area of basic American values.

Maybe the truth is that while the mayor and the city’s business community want to host the 2024 Olympics, they probably sense that there is a lot of latent opposition among the citizens of the region, some of whom, like Cambridge City Council member Timothy Toomey, think that Boston’s hosting of the Olympics would be “insane.” Perhaps it was in recognition of this that much of the Olympics bid process has been under wraps, requiring a public records request for the Globe to get access to the agreement. Dan O’Connell, the president of Boston 2024, has pledged that the process will be transparent going forward, but that is cold comfort, especially given the rampant corruption that has long characterized the Olympics:

“As University of Toronto sociologist Helen Jefferson Lenskyj points out, Olympics that aren’t beset by funding and human-rights scandals have become more the exception than the rule these days. In Sydney in 2000, it was Australia’s horrible treatment of its indigenous peoples and threats to deal in force with aboriginal protestors who planned demonstrations during the games. In Beijing in 2008, it was China’s record of repressing all dissent, not to mention its forced relocation of perhaps 1.5 million people to make way for all those shiny new Olympic facilities. For that matter, Atlanta officials displaced an estimated 36,000 people to clear the way for the 1996 Games, while arresting homeless people to ensure that they wouldn’t sully their city’s TV image—something that’s become a bit of a tradition for Olympic host cities.”

No one need add the Sochi Olympics’ harassment of gays and lesbians as another stunning low point in the history of the Olympics. In Boston, a generally liberal city, the scandalous history of the Olympics has to be a concern—and a good reason for the USOC to try to tamp down potential dissent. A contract that violates the First Amendment of the U.S. Constitution is worthy neither of the City of Boston, this nation’s “cradle of liberty,” nor the nonprofit that represents America in the international Olympics community.—Rick Cohen