On Obama, Will Progressives Be “Dupes of Our Own Hopes?” 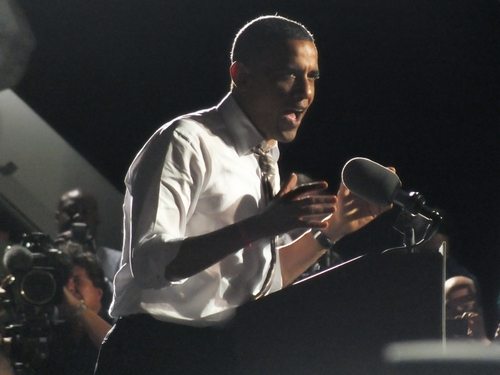 Longtime activist Norman Solomon, the co-founder of RootsAction.org and the founding director of the Institute for Public Accuracy, has recently weighed in with advice to politically progressive groups about the tactical issue of the moment: whether and how much advocacy groups should accept, endorse, and/or buy into the political compromises of national political leadership. Solomon’s focus is President Barack Obama, who Republicans viewed as having used his second inaugural address to draw a line in the sand about contentious political issues such as the debt ceiling and sequestration, but who some progressives see as having given a speech with noble statements that contradict the much less progressive policies of his administration.

Solomon is clearly in the latter camp, contending that “despite often nice-sounding rhetoric from the president, this administration has continued with a wide range of policies antithetical to progressive values.” In his essay, “A Letter I Wish Progressive Groups Would Send to Their Members,” Solomon reminds readers of a statement from the late Howard Zinn: “When a social movement adopts the compromises of legislators, it has forgotten its role, which is to push and challenge the politicians, not to fall in meekly behind them.” Solomon’s point is to remind social action advocates that while President Obama might compromise (or might in some ways be more conservative than his progressive second inaugural rhetoric), advocates have to push toward the edge and not simply accept the compromises of the Obama administration.

“Obama has led the Democratic Party – including, at the end of the legislative day, almost every Democrat on Capitol Hill – deeper,” Solomon contends, “into an abyss of corporate-driven austerity, huge military outlays, normalization of civil-liberties abuses and absence of significant action on climate change.” Although Solomon says that there was much to celebrate in defeating the Republicans at the polls, the post-election Obama has put cuts in Social Security and Medicare on the table for negotiations, has continued and expanded the administration’s use of weaponized drone strikes, has weakened whistleblower protections, and is feared to be ready to approve much of the Keystone pipeline.

Solomon calls for advocacy organizations to actively and publicly oppose “wrong-headed” Obama administration policies, partly by pressuring congressional Democrats: “If certain members of Congress resent being pushed by progressives to challenge the White House, they lack an appreciation for the crucial potential of grassroots social movements,” Solomon argues. “On the other hand, those in Congress who ‘get’ progressive social change will appreciate our efforts to push them and their colleagues to stand progressive ground.”

The NPQ Newswire has been paying attention to analyses of political action strategies for the lessons they contain for nonprofits. Theda Skocpol’s critique of the mistakes made by climate change action advocates undoubtedly prompted thinking about the value of inside-the-Beltway advocacy strategies versus more widespread grassroots mobilizations. In Obama’s first term, there was a reluctance among many groups to take the administration to task for failing to follow through or even pursue policies that had been promised on climate change, the public option on health care reform, comprehensive immigration reform, and mortgage foreclosure relief, just to name a few. Regardless of whether that was right or wrong for Obama’s first term, Solomon is arguing that progressive groups commit to pressuring the Obama administration to resist temptations to stray from—or compromise on—progressive principles.

Fundamentally, he is reminding advocacy groups not to fall in love with Obama’s inaugural rhetoric and lose momentum. He cites journalist I.F. Stone’s critique of inaugural speeches in which presidents “make us dupes of our own hopes.” –Rick Cohen