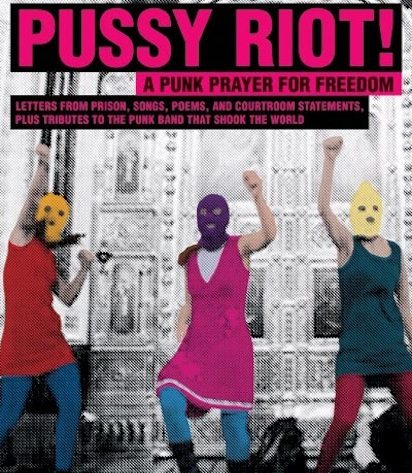 One of three members of a feminist punk rock band jailed for protesting the Russian Orthodox Church’s influence in the last Russian election was released yesterday on appeal while the other two women remain in jail. Thirty-year-old Yekaterina Samutsevich won her appeal because she had been ejected from the cathedral before the performance started but she is expected to continue to “rehabilitate” herself and the court has said that it will impose a number of restrictions on her.

The women who were originally found guilty of “hooliganism motivated by religious hatred” denied any anti-religious motivation in their protest, saying that their intention was to speak out on political concerns. The other two women remain in custody on a two-year sentence. Lawyers have declared that they will continue their efforts to free the women. The women, for their part, remain unbowed, making statements to the court that exhibit that they stand by their convictions.

Twenty-four-year-old Maria Alyokhina promised that even if they were sent to a penal colony, “We won’t stay silent—even in Mordovia, or Siberia—however uncomfortable that is for you.” Twenty-two-year-old Nadezhda Tolokonnikova said, “It’s as clear as daylight that this was a political act, not anti-religious… I ask you to quash this sentence.”

Reportedly, though the sentence given to the women has been decried abroad, a recent poll in Russia found that most support the prosecution, with 34 percent of those surveyed thinking that the two-year sentence is too lenient. On Sunday, in what defense lawyers characterized as an attempt to influence the appeals court, President Vladimir Putin commented on the case on television, saying, “It’s right that they were arrested. It’s right that the court took that decision, because you can’t undermine the foundations of morality, our moral values, [or] destroy the country. What would we be left with then?”

NPQ has been following this saga as part of a larger story about what some see as the suppression of dissent and the NGO sector in Russia under Putin. Recent laws requiring NGOs with foreign funding to register as “foreign agents” is another element of this trend. –Ruth McCambridge