One Wikipedia Approach to Ensuring Diversity in Volunteer Editors 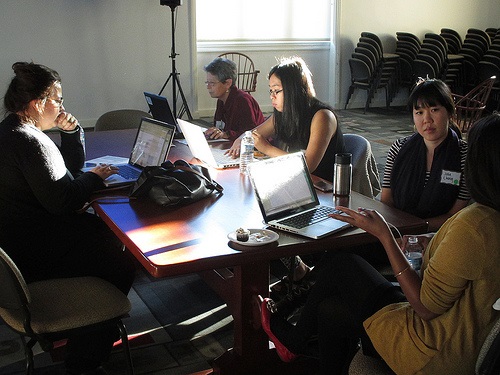 “It’s all so messy and democratic. Remember, we on staff have no editorial control whatsoever. We cannot tell any editor in the world, nor do we wish to, what to write on Wikipedia. When I, as a staff member, edit Wikipedia, I do so on my own free time, because one of the tenets of Wikipedia is that you do not pay for content and editing. So I do it as a volunteer, and so do all of us at the foundation. But if you think about that—if you think about the extraordinary complexity of who writes and what they write about, and then the enormous, extraordinary, radical potential of what more could be written about, we have one heck of an agenda before us.”

On Wednesday evening, the Philadelphia Museum of Art hosted a Wikipedia edit-a-thon aimed at adding or expanding entries for artists whose work is included in the current exhibition “Represent: 200 Years of African American Art.” Prior to the event, only a handful of the 50 or so artists had comprehensive Wikipedia entries, and 27 had no entries at all. As reported in the Philadelphia Inquirer, as well as previously in NPQ, this is a symptom of “a broader systemic bias within the user-edited encyclopedia, where 90 percent of editors are male, and minorities are significantly underrepresented.”

Everyone knows—or certainly should—that Wikipedia is not the most reliable source of information, however well intentioned its democratic organizing principles may be. And yet, it’s hard not to use it as a source of information—and often the first source—when researching a topic online. Not having a Wikipedia entry may give the impression that the subject of a search doesn’t rate. What it really means, however, is that no one has taken the time to create an entry or to add meaningful citations—quite possibly because active editors in the world of Wikipedia lack the knowledge or the interest to fully develop entries on topics unfamiliar to them.

Increasingly, nonprofits are leading the charge to ensure that Wikipedia content is better balanced. Libraries, galleries, museums and universities are often behind the edit-a-thons, and there’s an emerging breed of “editor-activists” intent on “bringing different perspectives to this collective repository of knowledge,” according to Inquirer staff writer Samantha Melamed. In fact, there’s such a need to improve the diversity of content that the folks behind Wikipedia have developed guidelines for how to run an edit-a-thon. (For the record, you may find the term “edit-a-thon” on Wikipedia, but you’re not likely to find it in a dictionary.)

Women in particular are often given short shrift in Wikipedia entries—so much so that the Wikimedia Foundation is offering $250,000 in grants for initiatives to help close the gender gap. A gap that became glaringly obvious when a group of female authors were recently moved from the category “American Novelists” to one called “American Women Novelists,” and when a study published this year showed that “entries about women were significantly more likely to discuss romantic relationships or family issues.”

Some of the notable edit-a-thons aimed at adding entries about women have included:

But as the Philadelphia museum edit-a-thon demonstrated, artists of color—and not just women—are also underrepresented in Wikipedia. For the museum’s event, participants were expected to include researchers, art historians, students and members of the public, who were asked to bring their own computers if possible and to set up Wikipedia accounts before they arrived. Museum staff provided reference materials and topics for research. “Represent” curator John Vick hoped the edit-a-thon would produce new or improved entries for Horace Pippin, Barkley Hendricks, and Allan Randall Freelon. Mary Mark Ockerbloom, who is Wikipedian in Residence for the Chemical Heritage Foundation in Philadelphia, was on hand to offer a training session for new Wikipedia editors, introducing them to writing standards for the site and offering guidance on best practices.

Ockerbloom got into Wikipedia editing while building an online database of female writers. She acknowledges that edit-a-thons may be a form of activism, but cautions editors to resist rewriting history or putting a spin on it. “Let the facts tell the story,” she says.

Or else run the risk being accused of “wikibombing” or perhaps “citation overkill.”

NPQ wants to hear from you: How else might nonprofit organizations advance minority, gender or other types of imbalances in Wikipedia content? Tell us about an edit-a-thon you’ve already hosted, or one you’d like to organize or participate in.—Eileen Cunniffe