Open on Thanksgiving? Maybe Not – Walmart Workers Begin Walk Out 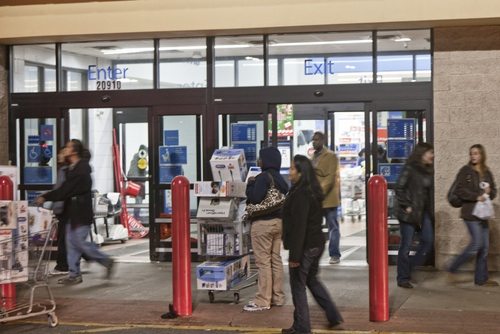 NPQ believes that along with the rest of the world, we will be seeing more activism among workers in the near future so after the protests across Europe last week we are unsurprised by this upraising of Walmart workers, timed immediately before the holidays.

For many, ‘tis the season to be shopping, but for some Walmart workers it might be the season to strike, citing low wages, sharply increasing health care premiums, and a punitive atmosphere that discourages and punishes people for speaking up. This article on SFGate.com says that on Wednesday about a dozen workers in Walmart’s distribution warehouses in Southern California walked out. The next day 30 walked out from six stores in the Seattle area.

Walmart is the biggest private employer in the U.S. The workers are part of a union-backed employee coalition called Making Change at Walmart and they promise that this will be one of a number of actions leading up to Black Friday. The union is reported to say that a thousand store protests are planned in Chicago, Dallas, Miami, Oklahoma, Louisiana, Milwaukee, Los Angeles, Minnesota, and Washington, D.C.

The corporation’s plans to open on Thanksgiving this year (along with Target and Sears) may be a factor in the situation. Charlene Fletcher, who is a Walmart associate in Duarte, Calif. says she will be expected to work from 3 p.m. on Thanksgiving Day. According to this article, workers say that complaints about working conditions result in fewer hours or termination.

According to this article, the first strike in Walmart’s history occurred in Los Angeles in October and organizers say that that strike spread to 28 stores in 12 states.

“We have to borrow money from each other just to make it to work,” said Colby Harris, a Wallmart employee of three years. “I’m on my lunch break right now, and I have two dollars in my pocket. I’m deciding whether to use it to buy lunch or to hold on to it for next week.” Harris earns $8.90 an hour.

He said that what is taken out of his check for health care costs is supposed to triple in January when Walmart plans to scale back its contributions to workers’ health care premiums, which are expected to rise between 8 and 36 percent. Sara Gilbert, a Walmart manager who was striking in Seattle, called in on her cell phone: “I work full time for one of the richest companies in the world, and my kids get state health insurance and are on food stamps,” she said.

NPQ is interested in the many ways that nonprofits are becoming involved in attempting to balance the economy away from the extremes of the few very rich and a growing poor population marginalized out of economic stability. –Ruth McCambridge