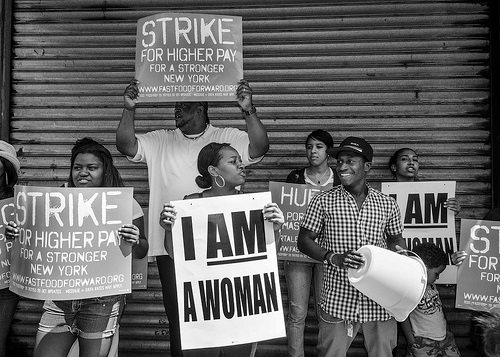 NPQ readers may remember what we have written previously regarding the fact that many low wage workers employed by big profitable corporations (like fast food establishments or Walmart) are forced to make use of public benefits to make ends meet in even the most basic ways. Now, a new report from the University of Oregon Labor Education and Research Center, entitled “The High Cost of Low Wages in Oregon,” asserts that the cost of public assistance to low wage workers costs that state’s taxpayers a conservatively estimated $1.7 billion each year. It also notes a basic disconnect between stagnating wages and growing employer profits. In other words, taxpayers are subsidizing the corporations through subsidies of low wage workers.

“Oregon is a state with one of the highest number of folks needing assistance,” said Raahi Reddy, a report co-author and faculty member of the UO Labor Education and Research Center. “And also a state with one of the lowest corporate tax rates. That’s a real disconnect.” The report found that “most employers in the sectors employing workers receiving public assistance are large, profitable corporations.” The report found that around 197,000 workers in the state earn so little that they must rely on public support. The jobs in question, often performed by women and people of color tend to fall into five industries: retail, food service, personal care, cleaning and maintenance, and healthcare support. The report finds that a full half of Oregon’s black or African American workers and 45 percent of Latino workers are employed in low wage industries. The report also states that parents interviewed for the report said they were often forced to work unpredictable hours, making family life even more difficult:

Still, employer profits in Oregon are steadily climbing, according to the report.

Fair Shot for All, a coalition of labor and advocacy groups and other organizations has just launched a campaign to raise the minimum wage in Oregon.—Ruth McCambridge