Earlier this week, Boston’s City Council passed the Ordinance Regarding Good Food Purchasing Standards, adding their city to a growing list of municipalities that have acted to use the purchasing power to build a healthier urban environment. This positive step is the outcome of nonprofits banding together in common purpose for a significant policy change.

Organized under the banner of the Good Food Purchasing Center, the effort recognizes that “changing the food system means creating a system based on values. It means understanding relationships between distributors, vendors, and their suppliers and increasing transparency along the entire supply chain. Every year, public institutions across the United States—from school districts to city governments—spend billions of dollars on food purchases. They have the opportunity to lead the movement for food system change and express their community’s values while influencing supply chains.”

Suzanne Adely, content director for the Farm Animal Welfare Campaign of the American Society for the Prevention of Cruelty to Animals told Common Dreams that “The Good Food Purchasing Policy is not only expected to redirect millions of dollars to local producers and improve nutrition, environmental sustainability, and animal welfare, but also to create the infrastructure to improve wages and working conditions for hundreds of thousands of food workers and their families. Boston Public Schools’ adoption of the Good Food Purchasing Program is a huge leap forward in the quest of good food for all.”

The ordinance builds upon a holistic vision of a healthy and sustainable food system. In awarding contracts, Boston will use a number of interlocking criteria. The plan is to purchase food from small and mid-sized agricultural and food processing operations within the local area that utilize sustainable and healthy practices. From farm to delivery, businesses contracting with the city should respect workers’ rights and pay living wages. Farmers should be paid fair prices for their produce. Food service programs will promote health and well-being by having balanced menus with foods low in salt, sugar, and food additives.

According to Common Dreams, the ordinance also encourages “prospective food vendors to invest in…disadvantaged and minority communities by including in procurement requests preferences for prospective vendors who demonstrate a track record of hiring and investing in local disadvantaged communities; provide living wages to all their employees, including frontline food workers; are local minority, disabled, and/or women-owned businesses; and are local producers and processors operating in low-income communities and employing non-toxic, environmentally sustainable methods.” 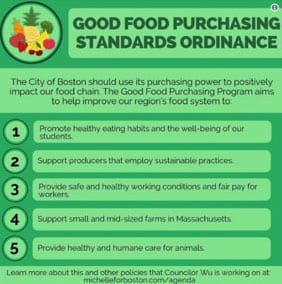 Using government’s economic muscle to help catalyze social change did raise some eyebrows. Last December, the Boston Herald had urged the City Council in an editorial not to move forward:

Maybe the Boston City Council means well, but there’s the appearance that they are leveraging the lucrative purchasing power around feeding school kids to effect large-scale political and social change in the region, extending far beyond Boston.

Last month, it was the “fair workweek” bill that sounded good in name but was odious in reality. Now we are presented with the Good Food Purchasing Program.

The Boston Public Schools have plenty of problems to tackle that more directly impact their students’ learning environment. We’d like to see a price tag on this initiative and an explanation as to why the goal of feeding Boston’s school children is tethered to effecting larger social change.

Despite such opposition, Boston City Council has voted to move forward and added their city to a growing list of earlier supporters of the Good Foods Purchasing movement, including Los Angeles, San Francisco, the Oakland Unified School District, and Chicago Public Schools. Of note in a city which has historic difficulty in dealing with issues of race and segregation, “The Boston ordinance looks to be one of the strongest yet, with explicit language around racial equity outcomes and transparency.”

There is a lesson in effective policy advocacy in the news from Boston. The national effort toward a responsible purchasing program illustrates the power of partnership and collaboration. With a national organization comprising 15 sponsoring nonprofit organizations led by the Food Chain Workers Alliance, the HEAL Food Alliance, and Real Food Media, the Center for Good Food Purchasing has been able to work with local organizations in common purpose.—Martin Levine