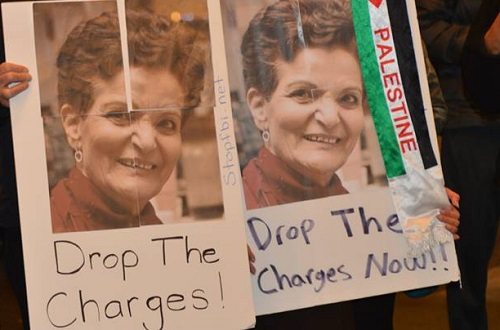 Forty-five years ago, Rasmea Odeh, was charged by the Israeli government for conducting an act of violence, planning an attack (attributed to the Popular Front for the Liberation of Palestine) on a Jerusalem supermarket that resulted in the deaths of two civilians. According to Josh Ruebner, an activist opposing the Israeli occupation of the West Bank, Odeh was “tortured into confessing a crime she did not commit.” (Ruebner’s retelling of her story of the physical and sexual abuse she received in Israeli prisons is heart-rending.) She was sentenced to life in prison, but was released by Israeli authorities ten years later in a prisoner exchange, a trade of 76 Palestinian prisoners for one Israeli soldier. Twenty years ago, Odeh emigrated to the U.S. from Jordan, and ten years ago she became a U.S. citizen.

In her life in Chicago, she has been a community activist, currently serving as associate director of the Arab American Action Network, which provides services, leadership development, and cultural outreach for the Arab community in Chicago. Among the grant funders of AAAN, according to information from the Foundation Center’s online directory, have been well-known philanthropies such as the Field Foundation of Illinois, the Lloyd A. Fry Foundation, the Proteus Fund, and the Robert Wood Johnson Foundation. Odeh herself was honored last year by the Chicago Cultural Alliance with its “Outstanding Community Leader Award” for her 40 years of work for the empowerment of Arab women.

It came as a surprise to many when, last October, the Department of Homeland Security arrested Odeh on the charge that she had engaged in the “unlawful procurement of naturalization” by failing to mention in her naturalization papers that she had been an unwilling resident of an Israeli prison. She has rejected a plea deal that would simply have her deported, despite facing 10 years in jail and a fine of $250,000 for violation of the law, and will be in court in October. Her lawyer, Michael Deutsch, says that Odeh, now 66, pled not guilty because she had not “knowingly intended to lie” on her naturalization papers.

The situation of Arab-Americans and particularly Palestinians in the U.S. is very complex. Their lives in Israel, particularly if they lived in the West Bank or Gaza, were difficult and contentious. Remember that for much of the past four decades, there has been a state of virtual or actual war between Israelis and Palestinians, with widespread arrests of Palestinians and charges and countercharges of mistreatment and torture. It’s hard to go back 40 years to the PFLP attack on that Jerusalem shopping market and pull apart what might have been the entire truth. However, Odeh’s charges of torture have been widely discussed and published. Her conviction in an Israeli military court, according to Anna Lekas Miller writing for the Daily Beast, is suspect not only because of the detailed allegations of torture, but because of the average three-minute trials of Palestinians, who are convicted 99.74 percent of the time.

But the issue is more fundamentally about Odeh’s human rights. By all reports, she has been a solid, honored citizen in Chicago and respected in Chicago’s nonprofit community. She was arrested by Homeland Security officials not because she was engaged in illegal activities here, but because of a ten-year-old omission in her naturalization papers. She probably faces what many Palestinian immigrants to the U.S. face—a history of interactions with the Israeli military that few would want to surface, much less relive. Should the Obama administration go after a Palestinian woman who, but for a line in her application, became a naturalized U.S. citizen a decade ago, who came to the U.S. after allegations of torture in Israeli prisons, and whose work in the U.S. seems to have been to provide services and support for Arab-Americans in the Chicago area? Or should that one missing line in her application undo two decades of Rasmea Odeh’s positive contributions to Chicago?—Rick Cohen