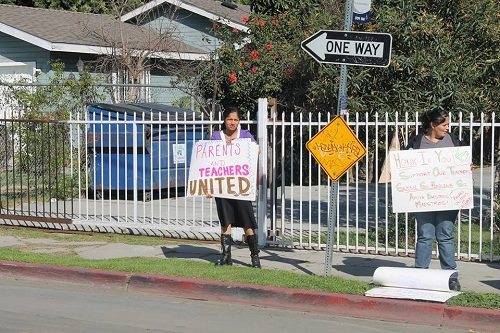 This story about the dismissal of an elementary school principal suggests that groups like Parent Revolution that support parent trigger laws may have seriously overreached in their efforts to vilify and demoralize teachers and administrators at traditional public schools. At Weigand Avenue Elementary School in Watts, with 53 percent of the parents calling for a change in the administration, the principal, Irma Cobian, was forced out.

Why was Cobian forced out? A couple of parents were quoted; one, Llury Garcia, said that Cobian was “rude and inaccessible,” and another charged that it took too long to get an individualized learning plan for her child, who suffered from a behavioral problem. Ben Austin, the head of Parent Revolution, which provided support to the trigger-happy parents, said that the low-performing school had “academically flat-lined” and explained, “The kids will be better off under new leadership, not someone who has presided over abject failure.” According to the Times, “All the students come from low-income families, more than half are not fluent in English and a quarter turn over every year.”

Oddly, however, test results under Cobian had begun to improve, and the parents had already approved Cobian’s turnaround plan for the school. (Garcia had previously been quoted in a statement from Parent Revolution as saying that the parents at the Weigand Avenue school had studied Cobian’s plan carefully; in this article, she says that she had never personally read the plan, and disagreed with its focus on reading and writing.)

Cobian strove to improve morale, sprucing up the school with a new logo. She eliminated student suspensions, and emphasized literacy as the gateway to success. Los Angeles Times reporter Teresa Watanabe added that the principal worked on increasing parent participation, increasing the percentage of parents who answered district surveys from 4 percent before she took over as principal to 51 percent. In apparent contradiction of sentiments about Cobian’s purported rudeness and inaccessibility, the survey responses indicated that “93% of parents said they felt welcome at the campus and 94% reported that the staff treated them with respect; 95% felt their concerns were taken seriously.”

Several parents turned out to express their support and appreciation for Cobian, including one who regrets having signed the trigger ouster. Of the school’s 22 teachers, 21 have asked for transfers out of the school in a display of loyalty to Cobian. They noted that anti-Cobian graffiti has been scrawled on school walls and on Cobian’s car.

Something doesn’t add up. Cobian hardly seems like the ogre or incompetent that Austin describes. But Cobian is the first administrator ousted from the Los Angeles public schools under the trigger law. It feels like Parent Revolution was flexing its muscle and putting teachers and administrators on notice. The result seems certain to demoralize teachers far beyond the Weigand Avenue Elementary campus. A button on the webpage of Parent Revolution is, “we <3 our teachers.” The Weigand Avenue Elementary School teachers clearly don’t feel “<3’ed”.

On the Parent Revolution website, the list of funders supporting this organization includes the Bill and Melissa Gates Foundation, the Walton Family Foundation, and the Broad Foundation. Is the ousting of Irma Cobian from Weigand Avenue Elementary School the kind of education reform these foundations want to own?—Rick Cohen