Peace Protesters March in Moscow, But What about Here? 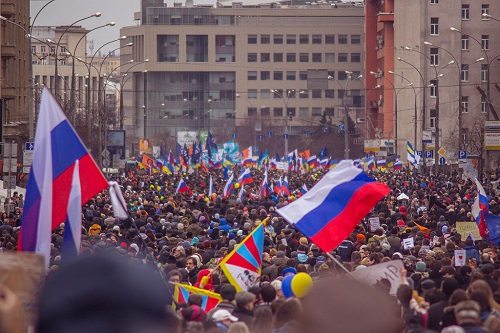 Twenty-six thousand people marched in Moscow this weekend in the largest protest against Vladimir Putin’s policies in Ukraine. The slogans on banners held by marchers included “Putin, enough lying and making war!”, “Putin, I’m sick of your lies,” “Don’t shoot our brothers,” “No to war,” “Don’t shoot your brothers,” “Ukraine, we are with you,” and “I don’t want a war with Ukraine.” Peace marches were also held in St. Petersburg and other cities in Russia and Ukraine.

The peace marchers were pelted with eggs thrown by pro-Putin onlookers and were certainly aware that they represent a minority in the polls, given the huge support of most Russians toward Putin’s policies toward Ukraine. Give the peace marchers credit for taking a courageous public position in the knowledge that most Russians don’t agree with them and that opponents of the Putin regime sometimes do not fare well.

The barbaric ISIL forces in Iraq and Syria engaged in mass murders of captured soldiers and beheadings of journalists and aid workers are hardly similar to the Russian forces that have invaded Ukraine on the side of Russian-speaking Ukrainians. As in Russia, however, polls suggest that a majority of Americans support President Obama’s plan to expand an air war against ISIL in Iraq and expand it to Syria, to arm anti-Assad/anti-ISIL moderates in Syria, and provide advisors to the Iraqi military.

Even if the Obama agenda for dealing with ISIL is warranted, going to war—and this is a war, regardless of the euphemisms that politicians and journalists are prone to use—requires thought, analysis, and debate. Our consistent concern for debate about war is rooted perhaps in this year as the hundredth anniversary of World War I, a worldwide conflagration of madness. The voices of peace during that time were muted (or sometimes silenced, as in the assassination of Jean Jaurès at the beginning of the war).

The Washington Post’s Paul Kane noted that it took Congress months of discussions before launching Desert Storm against Iraq in 1991 and three weeks of debate before invading Iraq again in 2003, but only a few hours of debate to authorize military action against ISIL before heading off for a two-month recess. As the Chicago Tribune’s editorial board noted, the war vote was a rare example of bipartisan consensus: “They won’t risk even debating a broad measure to authorize President Barack Obama’s military campaign against the Islamic State until after the November 4th election.” If Congress shows scant interest in a public debate about going to war, even if it is in theory without the use of combat troops on the ground at this moment, shouldn’t the public—and the nonprofit sector—be engaged in bringing the issues of war, pro and con, to the forefront?

Writing for The Nation, Lee Fang identifies a number of pro-war experts who have been used by the print and television press in the run-up to the Iraq escalation, indicating that they come from conservative think tanks like the Institute for the Study of War or are paid and subsidized by defense contractors such as General Dynamics. The voices of caution are harder to spot.

To be sure, there will be groups that will respond to this commentary identifying themselves as vocal and active, but the “what about us” response doesn’t add up to an answer. Other than Code Pink activists occupying seats at congressional hearings, the antiwar voice seems to be largely from libertarians aligned with former presidential candidate Ron Paul. The liberal left is having its troubles with messaging on the creeping new war in Iraq and Syria.

If the nonprofit sector cannot generate much of a dialogue around the new air war, maybe it should be doing something about a three-hour congressional debate that authorized new levels of bombing and armaments. To avoid a real debate, the Obama administration cut the strategy up into bite-sized pieces that could be voted on in Congress—the first part, a hardly unanimous endorsement of the administration’s plans to arm moderate Syrian forces.

The expectation is that there will be a fuller debate after the midterm elections when Congress reconvenes as a lame-duck body. If nonprofits are really concerned about their roles in promoting and protecting democracy, they ought to be pushing for a full debate about what it means to go to war in the manner that President Obama has proposed, what might work and not work against a body like ISIL, and whether President Obama’s new Bush-like “coalition of the willing” is, like “boots on the ground,” bereft of meaning. If Russians can stand up to President Putin, U.S. nonprofits ought to be able to raise their voices for peace in this country’s national dialogue.—Rick Cohen