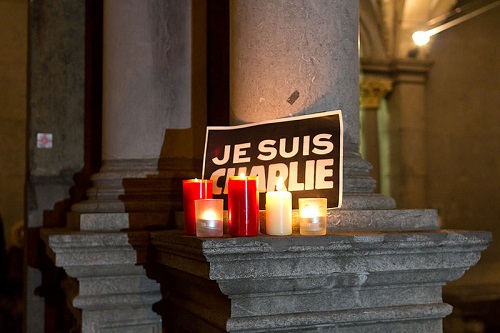 Pardon us if we take this moment to digress from our focus on nonprofits and other social sector organizations to talk about the environment that allows the social sector to survive and thrive. Without freedom of speech, thought, and expression, nonprofits would be no more than puppets mouthing whatever the dominant political, social, or religious powers would have them say. That isn’t just a matter of what authorities will allow to be said, but what we all police ourselves to say or not say even if the ideas do not sit well with neighbors, peers, and colleagues.

This is why we take this moment to recognize the PEN awards, whose winners were just announced last week. Receiving the PEN/Toni and James C. Goodale Freedom of Expression Courage Award will be Charlie Hebdo, the French satirical magazine that lost eight staff members to the violence of terrorism in January. Accepting the award on behalf of the magazine will be Jean-Baptiste Thoret, the magazine’s film critic, who came to the Hebdo offices to find his eight dead comrades after the attack.

“The CharlieHebdo attacks dealt a blow to the bedrock principle that no act of expression, no matter how provocative or offensive, can justify violence,” according to a statement in the PEN press release.

PEN’s award reminds all of us of the meaning of lives of the eight Charlie Hebdo staffers, not to be forgotten as we continue our quotidian functions that relegate the Paris terrorism to an event that happened half a world away in Paris and affected a magazine that most of us who aren’t fluent in French had no prior knowledge of until the devastating, horrific events on January 7th.

“We honor Stoppard not only for his literary genius, but also because he is a writer of conscience, courageously using his pen and his voice to speak out on behalf of those denied the freedoms that have helped make his own work possible.”

Stoppard follows other PEN award winners, including Salman Rushdie, who wrote for years with a fatwa death warrant over him after his publication of The Satanic Verses.

The Stoppard connection to Charlie Hebdo? American film enthusiasts may remember that he won an Academy Award for the screenplay of Shakespeare in Love, but those who relish live theater honor of him as the author of Rosencrantz and Guildenstern are Dead, a scintillating example of the “theater of the absurd.” The notion of absurdism as developed by Ionescu, Genet, and others is that life is without meaning. That is a total affront to ideologies and religions whose adherents claim establish comprehensive, unique, and mandatory meaning to life—and must be obeyed as a result. One of the practitioners of the theater of the absurd was Czech playwright Vaclav Havel.

Stoppard, who was actually born in what was then Czechoslovakia, was a lifelong advocate on behalf of political dissidents in Eastern Europe, including Havel, who later became the president of the post-Iron Curtain Czech Republic. Think of Rosencrantz and Guildenstern are Dead as a challenge to those who think their meaning, their worldview, is the only one that is permitted, like the worldview Havel had to face as a dissident who participated in the “Prague Spring” and his founding leadership role in Charter 77. Stoppard was an active proponent defending Havel (and translating some of his works) and speaking up internationally for Charter 77 as a challenge to a political regime that made the freethinking advocated by Havel and others a crime. It’s that freedom to think—and its corollary, the freedom to write and publish—that is at the heart of PEN’s award for Charlie Hebdo and the connection to Stoppard.

With these awards PEN is saying, in its own way, “Je Suis Charlie,” and reminding all of us in the social sector that our ability to do what we all do as nonprofits depends fundamentally on the rights that PEN is recognizing with these awards.—Rick Cohen