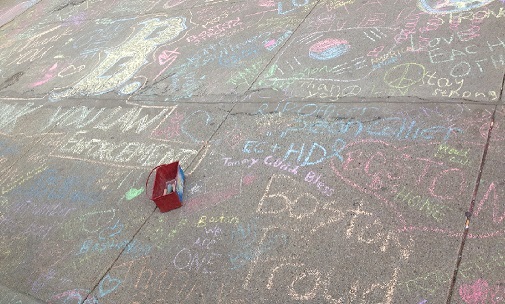 On Monday, the Boston Marathon was run. On Tuesday, the penalty phase of convicted marathon bomber Dzhokhar Tsarnaev began.

One of the saddest and most inspiring pieces of writing we have seen this year was a statement in the Boston Globe written by the parents of Martin Richard, the eight-year-old killed in the Boston Marathon bombing. Their daughter also lost her leg, but in their letter, they publicly supported “taking the death penalty off the table” in exchange for a life sentence and the waiving of any right of appeal. Here is part of what they wrote:

“We understand all too well the heinousness and brutality of the crimes committed. We were there. We lived it. The defendant murdered our 8-year-old son, maimed our 7-year-old daughter, and stole part of our soul. We know that the government has its reasons for seeking the death penalty, but the continued pursuit of that punishment could bring years of appeals and prolong reliving the most painful day of our lives. We hope our two remaining children do not have to grow up with the lingering, painful reminder of what the defendant took from them, which years of appeals would undoubtedly bring.

“For us, the story of Marathon Monday 2013 should not be defined by the actions or beliefs of the defendant, but by the resiliency of the human spirit and the rallying cries of this great city. We can never replace what was taken from us, but we can continue to get up every morning and fight another day. As long as the defendant is in the spotlight, we have no choice but to live a story told on his terms, not ours. The minute the defendant fades from our newspapers and TV screens is the minute we begin the process of rebuilding our lives and our family.”

This was followed by a similar call from Jessica Kensky and Patrick Downes, who were newly married when they both lost legs in the bombing—two of the 264 people injured. Kensky thanked the Richards for their statement, which she called “elegant, respectful and strong,” and both agreed with the Richards’ sentiment that life imprisonment was the best option to keep Tsarnaev from hurting anyone else while “assuring that he disappears from our collective consciousness as soon as possible.”

Both statements were respectful to others who do not share their views and, in the end, it will be the jury who decides for death or life imprisonment. But, although a recent national poll found that 53 percent of respondents favored the death penalty, in the state and city where the act occurred, according to a poll carried out by local public radio station WBUR, more people opt for life over death. 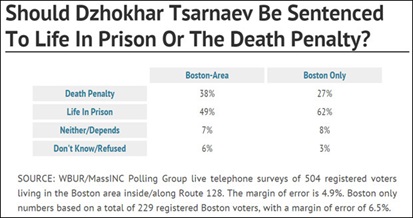 Women in the area are far more likely than men to favor life over death. 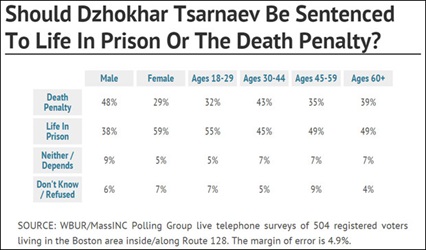 But will the jury be a representative body? Tsarnaev’s jury is all white and is made up of 10 men and eight women, all of whom were qualified for the trial partially on the basis that they could vote for the death penalty. Only 12 of them will make the final decision. It is clear that Boston is generally not in favor of heaping brutality on brutality or on reliving the horror of that time while appeals progress, but we may have it thrust upon us.

No one has been put to death in Massachusetts, site of the infamous Sacco and Vanzetti case, since 1947, although Gary Sampson was sentenced to death in 2003 only to have his sentence overturned eight years later. Another sentencing trial is scheduled later this year—which I believe speaks to the points made by the Richards family.—Ruth McCambridge