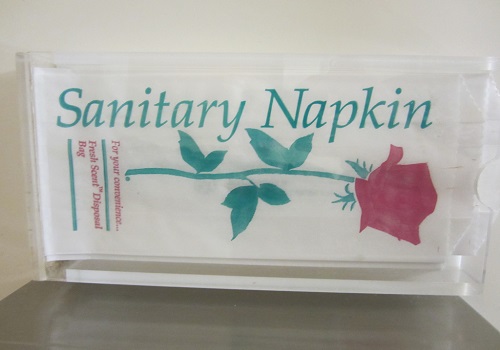 It started with a tweet, as many viral movements do nowadays:

Blunt and to the point, menstruation carries a stigma worldwide and in many cultures is an unspoken, taboo topic. Universally, reactions toward menstruation are typically negative. Women are simply not supposed to talk about their periods.

@cutequeer96 created the original post, which has amassed thousands of retweets and favorites, along the way catching the attention of a German artist who took the post and turned it into a visual project.

Imagine our surprise (and some horror) at seeing Elonë, a young German woman from Karlsruhe (a small city near the French-German border) stick sanitary pads with feminist messages all over her home town for anyone who forgets that women’s bodies are not in fact objects to be poked and prodded.

Unsurprisingly, the project has drawn criticism from those who call the project itself sexist and demeaning, much of which can be read on her social media accounts. In defense of the project, Elonë has said, “Feminism is equality, not men hate.” Instead, Elonë says, “I did this to provoke. I did this to get people to think.” Others have encouraged the idea, calling it inspirational for bringing attention to an important topic in a striking way.

The key element to the project is how it grabs your attention. Female hygiene products are meant to be stowed away, hidden from men and women alike. The art works both to dispel a taboo and provoke discussion about the treatment women and girls receive. Elonë has encouraged others to take up the project themselves; if you do, tag her so she can follow along.—Shafaq Hasan