PETA and Poe: A Coupling Not to be?

February 17, 2011; Source: Mother Nature Network | The city of Baltimore has regretfully decided to eliminate funding for the Edgar Allen Poe House and Museum, leaving the organization to fend for itself for the first time, in a truly horrific economy. It costs just $80,000 a year to run the organization, a price tag that is now being paid out of pocket by the museum’s curator of 32 years. So People for the Ethical Treatment of Animals (PETA), always on the lookout for a creative way to get people to pay attention to its cause, offered to provide some funding in return for the display of an ad that would read “The Tell-Tale Heart of a Meat-Eater. Don't Be Haunted by Bad Health: Go Vegan. PETA." 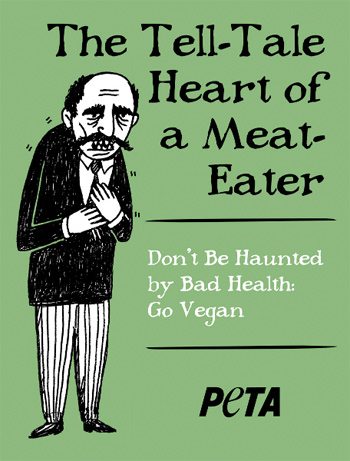 But Baltimore City Planning Director Tom Stosur says, "The interest and creative suggestion is appreciated, but the museum's landmark status doesn't allow for ad displays for products or causes outside and space is limited inside." Apparently, even though it no longer pays for the facility, it wants to lay claim for the pure principle of the thing. Our opinion is you should not be able to have it both ways, Mr. Stosur. Pay up or shut up. After all, Poe was a fellow bird admirer so there is some alignment.

Honestly first the roses and cognac disappear and then this public disavowal from a city that boasts on the man? I am getting out my checkbook and paying homage to one of my most favorite poets.

Now to conclude, I’ll just share the following excerpt from Poe’s, “The Bells.” Read it aloud once with feeling.

Hear the loud alarum bells –
Brazen bells !
What tale of terror, now, their turbulency tells !
In the startled ear of night
How they scream out their affright !
Too much horrified to speak,
They can only shriek, shriek,
Out of tune,
In a clamorous appealing to the mercy of the fire,
In a mad expostulation with the deaf and frantic fire,
Leaping higher, higher, higher,
With a desperate desire,
And a resolute endeavor
Now — now to sit or never,
By the side of the pale-faced moon.
Oh, the bells, bells, bells !
What a tale their terror tells
Of Despair !
How they clang, and clash, and roar !
What a horror they outpour
On the bosom of the palpitating air !
Yet the ear, it fully knows,
By the twanging,
And the clanging,
How the danger ebbs and flows ;
Yet, the ear distinctly tells,
In the jangling,
And the wrangling,
How the danger sinks and swells,
By the sinking or the swelling in the anger of the bells –
Of the bells –
Of the bells, bells, bells, bells,
Bells, bells, bells –
In the clamour and the clangour of the bells !