Pew: Reprieve for Undocumented Youth Could Impact as Many as 1.4 Million 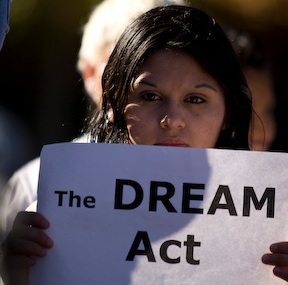 President Obama acted on behalf of undocumented youth because “it is the right thing to do,” he said, during a press briefing at the White House Rose Garden on Friday. “It makes no sense to expel talented young people, who, for all intents and purposes, are Americans,” Obama said of U.S. policy towards those sometimes referred to as DREAMers (due to their desire to see the DREAM Act passed). “They’ve been raised as Americans [and] understand themselves to be part of this country. It makes no sense…to expel these young people who want to staff our labs, or start new businesses, or defend our country, simply because of the actions of their parents—or because of the inaction of politicians.” This major immigration policy shift could affect up to 1.4 million children and young adults, based on Pew Hispanic Center estimates.

Secretary of Homeland Security Janet Napolitano acted on the president’s call for a “deferred action directive” and issued a memorandum explaining how prosecutorial discretion will be used. Individuals under 30 years of age can benefit from this directive if they can prove: that they were brought into the country when they were younger than 16; that they have been living here for at least five years; and that they are currently in school, or have graduated from high school or obtained a GED certificate. Also, those who were or are honorably discharged veterans of the U.S. Coast Guard or Armed Forces and have no criminal record or pose no threat to national security or public safety could also be covered by the reprieve.

The president made it clear that “this is not amnesty [and] this is not immunity. This is not a path to citizenship. It’s not a permanent fix. This is a temporary stopgap measure that lets us focus our resources wisely while giving a degree of relief and hope to talented, driven, patriotic young people.”

There is no reason to doubt that his feeling that “it is the right thing to do” drove the president’s decision However, Obama was also spurred by relentless pressure from the DREAMers themselves and their advocates, including very vocal advocates within the Democratic Party. This was also a brilliant political move that took the DREAM Act discourse back from Marco Rubio and the GOP, likely locking in the Latino vote and cornering Mitt Romney, who has yet to say whether he would rescind this reprieve or not if he wins the presidential election. – Erwin de Leon