Philanthropy after the Thaw 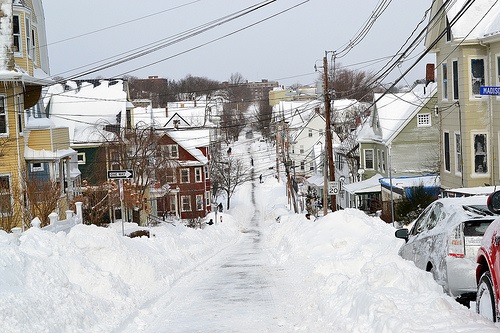 Editor’s Note: This is an ode to the often-unseen role of the nonprofit sector—in this case, during and after the big snow this past winter in Massachusetts.

Now that Winter 2015 is in the record books as the snowiest winter ever in Boston, we have begun to take stock of the impact the weather had on the city and the region. From the battering of our collective psyche to the impact on schools, municipalities, business, and infrastructure, it has truly been an epic season.

Given the work that I do advising foundations and nonprofits, I wondered about the impact on nonprofits in particular. A little digging (no snow shovel required this time) revealed how nonprofits locally and nationally responded to the challenges, how they are rebounding, and what this winter taught them about how to be better prepared for the unknown and unpredictable.

We all know that New Englanders have a reputation for being persistent in the face of adversity, and perseverance was certainly this winter’s watchword. The region’s public transit system was pushed past the brink, stranding riders who rely on it for transportation to work or school and to navigate metro Boston.  “Nonessential” workers were encouraged (or forced) to work from or stay home. But for those who could not work from home, like the city’s hospital workers, direct care providers, and other essential personnel, there was no easy solution.

To accommodate essential personnel, the city’s hospitals set up sleeping arrangements (sometimes at local hotels, but more commonly in empty hospital rooms) for their medical personnel and staff, and encouraged people due to report for shifts during a storm to call their local police and secure a ride to work. Similarly, Pine Street Inn, one of the city’s largest housing providers, with scores of shelter, transitional, and supportive housing properties in and around Boston, rented SUVs to pick up staff during the worst of the recent storms. Their nighttime homeless outreach efforts were all the more critical in the midst of the blizzards.

Direct service providers on the front lines of providing food, clothing and shelter for Boston’s most vulnerable residents were challenged to retain their services during four consecutive weeks of blizzards and record cold temperatures. The networks of charitable food providers were challenged in their food distribution efforts. Earlier this winter, local Boston radio station WBUR reported that The Greater Boston Food Bank, which distributed nearly 50 million pounds of food last year to a network of 500 agencies, made up for four closures with staff working nights and weekends and increased volunteer shifts. Meals on Wheels persisted in delivering meals to the nearly 75,000 homebound elderly in the state, despite towering snow banks and no place to park, because the fragile elderly they serve would not eat otherwise. They delivered double meals, frozen meals, and nonperishable food in advance of these storms. St. Francis House, another shelter provider here in Boston, saw a 36 percent increase in the number of people being provided with clothing (especially winter coats and boots) as well as an 11 percent increase in meals served this winter. It began opening its doors earlier each day, before 7 a.m., to accommodate increased demand.

Efforts like these were not limited to Boston. The Midwest and Mid-Atlantic regions got their fair share of snow, too, with the latter having significantly smaller budgets for snow removal and far fewer pieces of critical equipment.

Nonprofits also faced the difficulty of being property owners in the harsh climate. The ubiquitous ice dams that hung from gutters all over town impacted many nonprofit facilities. At a recent visit to the Museum of Afro-American History, snow was melting at a fast pace from the roof of the newly restored gem, the African Meeting House. The Abiel Smith School across the street suffered water damage and will need additional repairs, as is the case with nonprofit facilities all over town. The American Red Cross has in recent years expanded its disaster preparedness information as well, covering everything from planning for floods and snow emergencies to the increased risk for fires during the winter months.

So what has all this cost? Certainly, the cost to remove and move all that snow has blown municipal and nonprofit budgets, already constrained in the current economic climate. Nonprofits had to pay overtime costs, lodging, and other weather related expenses. The Boston Globe reported in February that the snow-related shutdown of roads and transportation cost Massachusetts $265 million a day, according to a study published by the American Highway Users Alliance. Massachusetts ranked second behind Illinois, whose snow-related disruption exceeded $400 million per day, according to the study. Almost two-thirds of those costs in Massachusetts (nearly $200 million) were from losses among hourly workers during the snowstorms. The study doesn’t cite how many of those were nonprofit employees, but given that the nonprofit workforce represents thirteen percent of the state’s workers, an estimate of the cost to nonprofits solely for lost wages would be over $25 million.

Despite all of this, the city persevered. The Isabella Stewart Gardner Museum, whose Venetian palace is a beacon of light and hope any time of year, opened its doors for free on a cold day in February as a place for weary Bostonians and visitors to escape the snow. Boston’s Mayor Marty Walsh’s Office of Economic Development launched “Boston Bingo” to encourage residents to support local businesses which were hit particularly hard this winter, and other towns including Brookline have made a similar local version. The City of Somerville created a Space Saver contest, asking its residents and local artists to propose creative reuse of everything from orange cones to lawn chairs that were used throughout the city to save a parking spot dug out from the snow. Our office at Hemenway & Barnes hosted a “Worst Commute Ever” story contest.

Philanthropy can and should be persistent, too. Savvy individuals and foundations will continue to respond to the needs of nonprofits, both in winter and beyond. Complex social problems are not solved overnight, and donors need to be willing to stick with charities through their most challenging times. We encourage our clients to talk with their grantees and ask them how they fared this winter.

Some writers likened this winter to a natural disaster and called for a disaster-relief response to this “Winter from Hell.” Just as in any “disaster,” there are short-term opportunities to support the spike in demand created by the weather, as well as longer-term funding needs to address systemic issues. The need for philanthropy, government, businesses, and nonprofits to work together toward shared solutions is evident; transportation reform and climate change are just two issues for deeper scrutiny this spring.

So, where does that leave us? As Bostonians, we are challenged with paying for the increased cost burden from this epic winter. We are more aware of the need for robust disaster and business continuity planning and a committed philanthropic response.

But most importantly, we are extremely grateful for the vibrant nonprofit sector in our city and region that supports the needs of our most vulnerable residents as well as promotes the academic, cultural, environmental and spiritual life of our city. And we are eagerly awaiting our rituals of spring, including the Make Way for Ducklings parade, the opening of the Swan Boats, and the Boston Marathon, which raises nearly $40 million for charities each year. We also look forward to seeing the next chapters for all our nonprofits as they surmount their weather-related winter challenges with creativity, grace and, of course, perseverance.

Gioia C. Perugini is associate director for Family Office and Philanthropy Services at Hemenway & Barnes, LLP. She works with individuals, families, advisors, charitable trusts, and foundations to provide a range of philanthropic and client services. Her clients rely on her to design and implement charitable giving strategies, research particular charities, negotiate gifts of cash or tangible assets and coordinate family meetings.