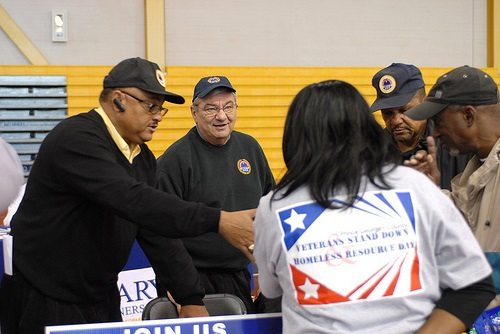 November 24, 2014;Funders Together to End Homelessness

Here’s an example of private philanthropy stepping up to address what should very much be a governmental responsibility shouldered by everyone in our society—honoring and caring for homeless veterans.

As retired attorney Tom Nurmi, a member of the board of trustees of the William S. Abell Foundation and chair of its Homelessness Committee, writes on the Funders Together to End Homelessness blog, “Our country has an obligation to ensure that those veterans who struggle to reintegrate into society will receive the assistance that they need—and deserve. America has never been as close to ending veteran homelessness as it is today.”

Funders Together to End Homelessness bills itself as “a national network of funders supporting strategic, innovative, and effective solutions to homelessness.” Private foundations have historically not played much of a role in helping to end veteran homelessness. But Nurmi gives an example of how philanthropy can make a highly leveraged impact.

He talks about the progress made in recent years in Washington, D.C., where the number of homeless veterans has dropped over 20 percent since 2010. While much of this reduction has been through HUD VASH housing vouchers, “there has been a realization that to really address veteran homelessness in the years and decades ahead, a more permanent infrastructure needs to be in place.”

He goes on to talk about what has become common knowledge: the high rate of PTSD and other mental health issues among the 2.5 million Iraq and Afghanistan vets who have returned after multiple deployments and the challenges around reintegrating with families due to lengthy and multiple absences. These problems often manifest in the form of homelessness many years after the veteran has returned, as was true with Vietnam era vets. Nurmi calls for permanent infrastructures, such as apartment buildings with dedicated veteran units.

His blog entry tells the story of the groundbreaking right before Veterans Day for the John and Jill Ker Conway Residence in D.C., which will consist of 124 units of affordable housing, 60 of which are dedicated to chronically homeless veterans. The project will have on-site support services for employment, mental health, legal and other issues.

This $32 million building was financed by a partnership between philanthropists, nonprofit service providers, and the government—philanthropy seed-funded the project with $1.5 million of capital, with the District of Columbia donating the land. Eventually, foundations provided a total of $4 million and leveraged public and private resources seven to one.

The project “took years” to complete, writes Nurmi, “but the end result will…ensure that veteran homelessness never again becomes the stain on our nation’s character that it is today.” He writes that it never would have happened without philanthropy taking the lead and putting up the initial resources.—Larry Kaplan