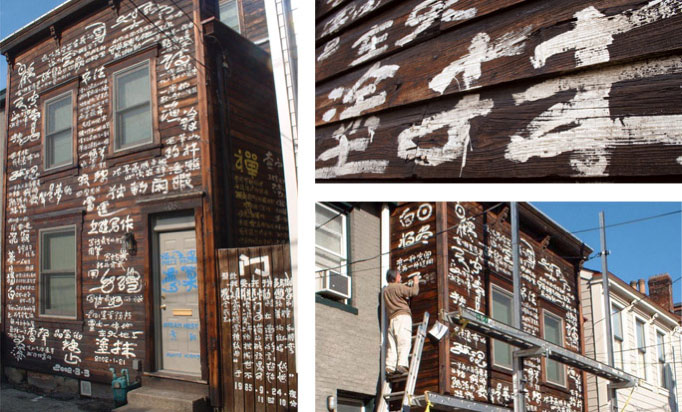 In 2004, Diane Samuels and her husband Henry Reese formed a grassroots organization called City of Asylum on the North Side of Pittsburgh, joining an international movement to offer homes in exile for writers and other artists forced to leave their countries because of their creative work. City of Asylum has made Pittsburgh one of 50 cities around the world participating in the International Cities of Refuge Network (ICORN), as well as serving as U.S. headquarters for the movement. This weekend, City of Asylum will open the doors to its new home, Alphabet City Center, with an inaugural reading by Svetlana Alexievich, the 2015 winner of the Nobel Prize in Literature.

Alexievich was born in Ukraine, but grew up in Belarus. As an investigative journalist and writer, she documents the emotional history of the Soviet and post-Soviet world. Alexievich faced persecution from the regime of Alexander Lukashenko, and fled Belarus in 2000. From 2006–2008 she lived as writer-in-residence in Gothenburg, one of the 50 cities in the International Cities of Refuge Network (ICORN). Her own life story demonstrates why ICORN is both necessary and important.

Alexievich also is “one of more than 300 musicians and artists from 60 countries who have passed through City of Asylum in its 12 years.”

Alphabet City Center is described on the website as “a home for writers, readers, and neighbors…that will include spaces for readings and performances, writing workshops and residencies, as well as a restaurant and a bookstore.” There’s also a broadcast studio.

As Samuels explains, “This whole neighborhood is more aware of global politics since City of Asylum. There’s an awareness when someone is your neighbor.” To date, the organization has hosted about 20 international writers for one- to three-month stays and has housed six exiled writers for stays averaging 3½ years. The goal is to offer not only a home, but also a voice, to the artists they host.

Reese describes the motivation for working with exiled writers: “They have lost their identities, their audience. Suddenly you can’t communicate the essence of who you are. We translate one of their major creative works into English to give them a voice in the U.S.”

Writers and artists are especially vulnerable to censorship, harassment, imprisonment and even death, because of what they do. They represent the liberating gift of the human imagination and give voice to thoughts, ideas, debate and critique, disseminated to a wide audience. They also tend to be the first to speak out and resist when free speech is threatened.

At the beginning, some residents of the Sampsonia Way neighborhood were not sure what to make of visiting artists like the activist poet Huang Xiang, who had spent 12 years in a Chinese prison. After Huang painted his poems across the front of his temporary home, City of Asylum paired him with American jazz musician and poet Oliver Lake, and the two offered a “spontaneous poem/song” concert, followed by an English translation of Huang’s poems, right in front of the house. That was in 2005, and 300 people showed up. Similar concerts have been held every year since then, mostly on Sampsonia Way, although in recent years the crowds have been growing and other venues have been used. Audiences “come to listen to jazz and writers reading their works in their native languages, with translations on giant monitors.” As many as 800 people have attended these performances.

With the opening of the Alphabet City Center, which can accommodate 200 people, the idea is to offer year-round concerts and other programming rather than one large annual concert and a smattering of smaller events. Two years ago, City of Asylum offered a total of 13 programs, but for 2017, 150 are planned. The second and third floors of the new center provide eight additional apartments for artists, on top of the six row houses and apartments already available through City of Asylum. In addition, the organization has a publishing arm, Sampsonia Way, which provides “a home for the work of endangered writers around the world; it publishes banned books in translation and anthologies of contemporary writing from countries where free speech is under threat.”

Samuels and Reese, both 67, are beginning to think about a time when they will step away from City of Asylum, and assistant director Silvia Duarte “is taking a larger role in the thriving nonprofit.” They want to be sure, however, that the organization stays true to its original mission even as it grows. Speaking of the artists they’ve met, Reese notes, “They don’t call themselves refugees. They’re writers.”—Eileen Cunniffe