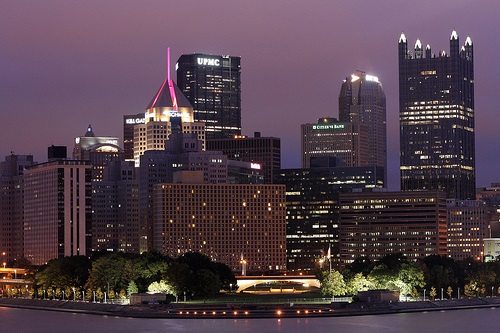 If the topic is Pittsburgh, it either involves the Pirates qualifying as a wild card team for the MLB playoffs or the city’s ongoing struggle with tax-exempt nonprofit property owners to negotiate a deal over payment in lieu of taxes. Mayor Bill Peduto’s new budget for the city—$505.9 million for 2015—depends in part on money that would come from a new deal with major property-owning nonprofits such as the University of Pittsburgh Medical Center, the University of Pittsburgh, Carnegie-Mellon University, and Highmark. The mayor’s chief of staff, Kevin Acklin, told the Post-Gazette that the administration is hoping for a 10-year agreement with nonprofits that would yield somewhere between $16 and $24 million annually.

For the past decade, nonprofit property owners have made payments through the Pittsburgh Public Service Fund, with the total amount ranging from $800,000 in 2005 to $9 million in 2006, though only $1.9 million last year. That Fund has not in the past included the University of Pittsburgh Medical Center, which instead made payments to the Pittsburgh Promise program, which supports $10,000-a-year, four-year college scholarships for eligible public school students. As of this past April, UPMC had committed $100 million to the Pittsburgh Promise, but other major nonprofit institutions have also contributed—the Grable Foundation, the Heinz Endowments, and the Pittsburgh Foundation, all donating between $10 million and $24.9 million; and the Richard King Mellon Foundation, contributing a sum between $5 million and $9.9 million.

Mayor Peduto told the Post-Gazette that he is hopeful that “a new agreement [would be] structured more along the lines of the Pittsburgh Promise.” The Promise doesn’t appear to have generated much critical coverage during its history. Most of the consistent criticism has been from Jake Haulk, the president of the conservative Allegheny Institute for Public Policy, who thinks the program would be better if it gave scholarships to private school students as well as public school pupils.

What the mayor seems to have meant is not that the nonprofits would add to the Pittsburgh Promise’s educational scholarships, but that the nonprofits’ contributions would pay for specific municipal functions such as street paving or city government technology as opposed to putting money into city coffers for the municipal government’s general operations. However, the mayor is anticipating that UPMC would be part of this new deal. If he has any chance of getting as much as $20 million a year from the nonprofits, allowing UPMC to carve its own separate deal with Pittsburgh Promise might make the mayor’s financial goal untenable. The city is clearly attracted by the deep pockets of Pittsburgh’s major nonprofit property owners:

These are big nonprofit institutions, obviously attractive to cash-strapped municipalities like Pittsburgh facing rolling pension deficits, but there are problems in the mayor’s requests. First is that with these requests for nonprofit payments in lieu of property taxes, local government is increasingly determining what is and isn’t tax-exempt on an ad hoc basis. Systemically, it is a mess, with nonprofits facing changes in their tax treatment based on the decisions of mayors and city councils rather than federal and state law.

Second, although Pittsburgh is looking at deep-pocketed nonprofit institutions, the request to have nonprofit property-owners kick in captures nonprofits large and small, regardless of their fiscal strengths and weaknesses. We don’t fully know what happens to smaller nonprofit property owners in these circumstances; however, we suspect that few have extra cash to devote to payments to pay into local or county government budgets.

Third, the mayor’s notion that nonprofits would pick and choose the portions of local government operations they feel are worth supporting sets a troubling precedent. We don’t want funders of nonprofits to pick and choose the aspects of nonprofit operating costs they think are worth supporting, and we don’t want taxpayers to sort through budget lines to determine the items to which they would limit their tax dollars.

As usual, Pittsburgh’s financial predicament leads to problems of definition and function for the nonprofit sector and broader issues for municipal finance overall.—Rick Cohen