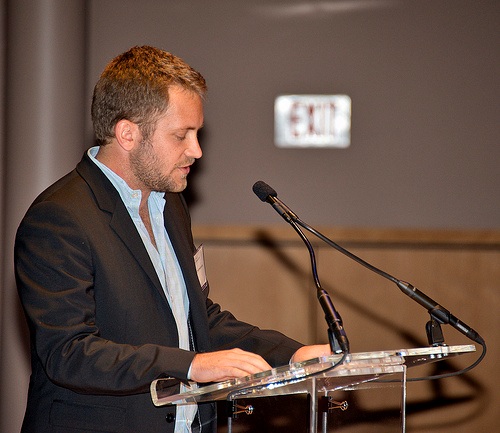 Three years ago, I and a group of friends started to dream up what a lot of people considered impossible: a festival that would bring poetry to all 2.6 million residents of Greater Miami.

Knight Foundation had just finished the first round of its famous “Random Acts of Culture” and we liked how those events turned everyday events into cultural occasions. What if did something like that? What if we did it every day for a month?

And that’s how O, Miami was born. In the poetry festival’s first year, we did 45 events and 19 projects in a 30-day span, and almost none of them had a recognizable headliner. (You can get a taste for it in a new report being published this week.)

As we head into our second full incarnation of the festival on April 1, we wanted to share a few of the things we learned about engaging new audiences and creating a cultural event that transcends geography, genre, and demographics.

1. The Internet is your friend, if you let it be: By the “Internet,” I don’t mean your festival’s website; I’m referring to how festivals utilize the content they create. Archiving your events is nice, but no one wants to watch a static video of a performance. All it does is remind the viewer that he or she wasn’t there. Think about what travels on the web: short videos that are entertaining and self-explanatory. As we’re planning the actual events for O, Miami, we treat web-only content as its own event that we budget for just like any other. For example, in 2011 we did a project with an artist named Agustina Woodgate in which she went into Miami thrift stores and sewed poems into random items of clothing. The video we made from that project, below, got picked up by The Guardian  and TIME Magazine and communicates the spirit of the festival in a way we could never explain in an interview.

2. Cross-pollinate: We try to partner with other organizations as much as possible, and in ways that give them creative agency in the festival itself. Our host hotel, The Betsy South Beach, created their own reading series on their front porch. Every day in April, at 5 p.m., a poet will give a two-poem reading. Yes, our visiting poets are staying there, but the hotel is also making their entire building into a vehicle for the festival. We could never do something like that on our own.

3. Be who you are: Although we try as much as possible to subvert the audience’s expectations about poetry, we’re also highly aware that poetry is always going to be, well, dorky. And that’s okay. We’ve come to learn, through the festival, that most people are dorks are heart. So while the festival is willing to stretch its audience, we won’t ever abandon poetry’s strength as a medium where people can be comfortable embracing their own intelligence.

4. Invite people who don’t fit neatly into your genre: We invited hip-hop legends Kool Moe Dee and Money Love to our poetry festival. Why not? They both have a lot to say about lyricism and are passionate about where their art form departs from the page. Sometimes it’s just as good to engage an audience in talking about what your genre is not as it is to engage them in what it is.

5. Make the audience the star: Just as we try to give partner organizations creative agency, we also want our audience to be active creative participants. There’s a lot of literature out there now about how audiences expect a higher form of engagement, but that’s not why we get them involved. We do it because we believe participation is an essential part of poetry. A poem will never be as flashy as a movie, but unlike a movie, anyone can write a “big-budget” poem. And we believe the future of the genre depends on everyone being given the agency to write their own work and have it displayed publicly….like behind an airplane!

This year we have an open contest to write a 50-character poem. The winning poem will be flown behind a biplane up and down Miami Beach the weekend of April 27th. Which brings me to…

6. Create advertising as content: The old model of advertise-in-order-to-get-audience is, in my opinion, outdated and a missed opportunity. If the only way we can reach someone is with an ad, then let’s reach them with something meaningful. In 2011, we partnered with The Poetry Society of America to bring their Poetry in Motion campaign to all 751 Miami-Dade buses. This year, we’re putting poetry on 100 lamppost banners around the county. Do these ads spread the word about the festival? Yes, but they also are the festival.

7. Emphasize the local:  No matter where you live, the residents of your city have strong opinions about it. Find ways to help people identify with the places that are important to them. This year, we’re conducting a contest with local public radio news outlet WLRN-Miami Herald News in which we’re asking their audience to submit short poems that begin or end with the phrase “That’s so Miami.” Then we’re going to play the best poems back on the radio and publish them on a unique tumblr site.

8. Remember, name recognition never hurts: And I think it helps even more if it’s unexpected. In 2011, we invited the actor James Franco. He hadn’t proven himself yet as a poet, but we invited him because we could see that his passion for poetry was genuine. He was making short films based on complex works such as Frank Bidart’s “Herbert White,” and he was studying with a great poet we knew, Tony Hoagland. James’s involvement in the festival sent a message to Miami’s audience that poetry is alive and relevant.

And this year we’ve invited Megan Amram, a young comedian who writes for the NBC show “Parks & Recreation.” She has only published a few poems, but we were impressed by them, and we are very impressed by her as a writer in general. Personally, it’s not important to me that she hasn’t been recognized yet as a poet. I think she’s interesting, and as an organizer, if I’m not following my nose and trusting my instincts, then why am I doing this?

P. Scott Cunningham is the founder of the O, Miami Festival which will take place again this April, which is National Poetry Month, throughout Florida’s Miami-Dade County.