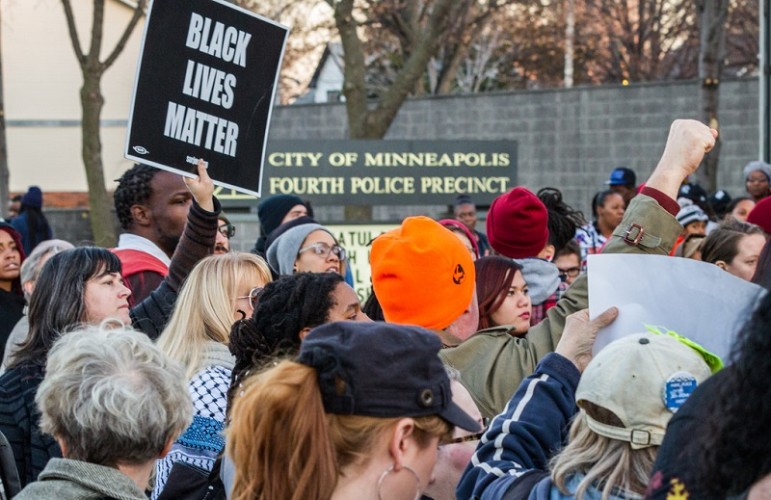 For more than a year now, NPQ has been closely following the Black Lives Matter movement, as protestors flooded city streets and spread onto college campuses around the country. Perhaps as much a catalyst as a product of the movement, we have also been following the deaths of various Black Americans, whether by the hands of law enforcement or, like this past Monday night, as a result of disgruntled fellow citizens. Police have arrested two suspects for firing into a crowd and shooting five people who had been protesting yet another recent death of an African American male in Minneapolis.

If the shooting itself wasn’t enough to stir tensions, immediate police reports after the shooting indicated they were looking for “three white male suspects.” Following the shooting, we know now that all five victims are suffering from non-life-threatening injuries and are expected to live, and on Tuesday, police announced that they had made two arrests, one of a 32-year-old Hispanic male and another of a 23-year-old Caucasian male. No other details have been released about the suspects thus far, but police have said one more suspect is wanted.

Witnesses have also said that there were somewhere three masked men and perhaps one woman who were shooting. Carrie Brown, one of the protestors, said she and other protestors tried engaged with the individuals in masks to keep the situation calm.

“One of the white protesters who had been with us since the beginning said, ‘Be careful, those guys are white supremacists,’” said Brown, referencing the three men and one woman seen by a nearby resident. “We asked them to remove their masks, asked who they were, invited them to come and protest with us peacefully once they did that.” The NAACP Minneapolis chapter president has agreed with the protesters in calling the shooters “white supremacists,” although those claims have yet to be confirmed.

Apparently, it was when the masked individuals were being led away from the protest that they turned around and started firing into the crowd. A video has also surfaced that allegedly shows the masked shooters before the shooting talking about their plan, although this video has yet to be verified.

In its reaction to the shooting, the Black Lives Matter Minneapolis group posted on its Facebook, “Tonight, white supremacists attacked the ‪#‎4thPrecinctShutDown in an act of domestic terrorism. We need you here tomorrow. We wont be intimidated. Students are walking out.”

The group had already been occupying the space outside the police precinct since November 15th for Jamar Clark, the 24-year-old Black man who was shot by Minneapolis police to compel the police to release the video footage of the shooting.

Protesters, some of whom were high school students who had walked out of class, walked through downtown Minneapolis on Tuesday.

Politicians have also stepped in as a way of defusing the growing tensions in the community and larger movement since Monday’s shooting. “I don’t want to perpetuate rumor,” said Rep. Keith Ellison (D) of the area where the shooting took place. “I’d rather just try to get the facts out. That’s a better way to go. I know there’s a lot of speculation as to who these people were. And they well could have been…I’m not trying to say they weren’t white supremacists. But I just haven’t been able to piece together enough information to say with any real clarity.” Since the shooting, Clark’s family has also voiced that protests should stop, given concerns for the protestors’ safety. “Thank you to the community for the incredible support you have shown for our family in this difficult time. We appreciate Black Lives Matter for holding it down and keeping the protests peaceful,” said Clark’s brother, Eddie Sutton. “But in light of tonight’s shootings, the family feels out of imminent concern for the safety of the occupiers, we must get the occupation of the 4th precinct ended onto the next step.” Certainly, the notion of white supremacists being behind the attacks is incredibly inflammatory, and community leaders would want to dissect those concerns before making any statements. With very few facts and tensions high, piecing together what happened on Monday night to these protestors is perhaps an issue better left to investigators. But is this protest a vignette of further violence protestors may face? Will there be copycat attacks? If anything, the attack appears to have catalyzed the protestors, who have no intention of slowing down or being scared off. In protesting violence, the protestors were met with more violence.