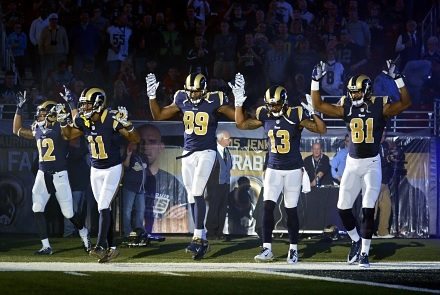 A group calling itself Boycott St. Louis Rams is accepting donations of Rams logo clothing from former fans who are protesting the players’ “hands up” demonstration from the game against the Oakland Raiders on November 30th. Their intention is to donate the clothing to homeless people, thus acting, they say in a Facebook post, as a positive force for good, “as opposed to [in] the destructive fashion that some protesters have chosen.” The group also seems talented in the art of performance theater; this campaign followed a ceremonial burning of some Rams jerseys at a local sports bar.

Perhaps due to blowback like this, the team (as of last night) planned to make a donation of an undisclosed size to The BackStoppers, a charity serving the families of fallen first responders, before the Thursday night game against the Arizona Cardinals. The director of BackStoppers publically expressed gratitude, but had no comment on the team’s motivation. (This is not the first time that the Rams have supported the BackStoppers organization, by the way.)

Gabe Crocker, president of the St. Louis County Police Officers Association, damned the donation with faint praise, calling it a “good first step” but going on to say, “The players’ actions had a profoundly negative impact on public safety personnel and their supporters throughout the community…I still would not expect many public safety folks to be lining up for tickets.” The Association had called for the five players to be disciplined for their protest. The Rams and the NFL declined to take this step, but a few days later, the Rams met with the police union to express their “understanding” and regret over any offense taken. They have clearly denied making an apology to the police association, however.

For another story of how the events of Ferguson have moved people around the country, read our newswire on the outpouring of support for a local library that’s become a community refuge.—Ruth McCambridge