Pope Invited to Address Congress Next Year and the Spin Begins 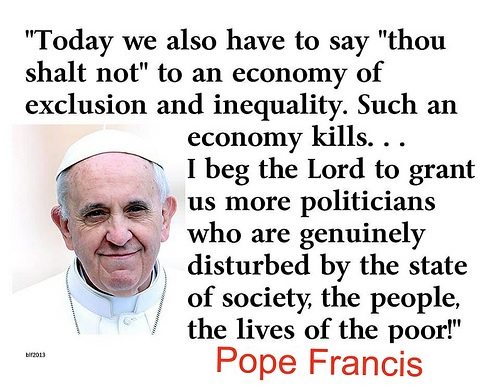 Yesterday, U.S. House Speaker John Boehner issued an invitation to Pope Francis to address a joint session of Congress next year. Immediately, Republicans and Democrats alike are attempting to spin the Pope’s views on poverty and capitalism to fit with their respective agendas.

Boehner, a Catholic, said in a statement, “Pope Francis has inspired millions of Americans with his pastoral manner and servant leadership, challenging all people to lead lives of mercy, forgiveness, solidarity, and humble service.” But then he went on to try to seize the day by saying that Americans “have embraced Pope Francis’ reminder that we cannot meet our responsibility to the poor with a welfare mentality based on business calculations. We can meet it only with personal charity on the one hand and sound, inclusive policies on the other.”

Nancy Pelosi, House Democratic Leader, is also Catholic and laid her own less wordy and overreaching claim—but then, she knows that the Pope will soon be meeting up with President Obama. “Pope Francis has lived his values and upheld his promise to be a moral force, to protect the poor and the needy, to serve as a champion of the less fortunate, and to promote love and understanding among faiths and nations,” Pelosi said.

Meanwhile, New York Magazine asks, “Can Pope Francis Bring Peace to Congress?” Immediately answering themselves with an “Almost definitely not,” its short article points out that the Pope yesterday tweeted “Please pray for me” and wondered aloud if this exhortation was related to the invite.—Ruth McCambridge