Popular “Repair Cafes” Build Community and Global Sustainability: Who Can Argue with That? 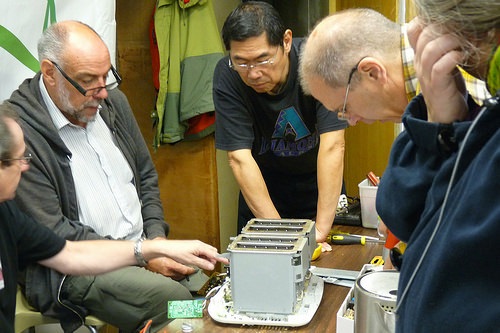 If you are like me, you have a number of gadgets that have given up the ghost but which look fixable if you only knew what to do—and besides, throwing it away will further doom the earth. The end result is that pink toaster on my counter that has not toasted for nigh on a year.

In Philadelphia, the Philly Fixers Guild has started volunteer “repair fairs” where they will help you fix your stuff. At one of the more recent events, attendees traveled from miles around, bringing their temporarily defunct heaters, stereos, and kitchen mixers, about half of which got fixed right then and there.

Repair Cafes were developed by a Dutch nonprofit as part of a “circular economy” movement and they caught fire internationally with more than 700 operating worldwide. The New York Times wrote the phenomenon up a few years ago.

“In Europe, we throw out so many things,” said Martine Postma, who reportedly came up with the original concept. “It’s a shame, because the things we throw away are usually not that broken. There are more and more people in the world, and we can’t keep handling things the way we do.”

“Sustainability discussions are often about ideals, about what could be,” Ms. Postma said. “After a certain number of workshops on how to grow your own mushrooms, people get tired. This is very hands on, very concrete. It’s about doing something together, in the here and now.”

There have been three Repair Fairs held in Philly since last fall, and the events include a kind of triage on the injured items:

“Guests fill out a form at an intake table, called triage, where the patient (broken item) gets a preliminary evaluation. The case is then assigned to one of nearly 20 fixers, whose specialties range from small electronics and circuit boards to welders, woodworkers, jewelry fixers and people who sew.”

Ron Bail of Westmont, New Jersey, has 30-plus years of mechanical and electronics experience, but even he is sometimes stymied, saying that some things are not made to be fixed. But even if you don’t walk away with a working pink toaster, presumably you know a bit more about how the #$*&! works—or doesn’t—because you are hanging out with your fixer guy or gal.

At the most recent fair, there were 102 items, of which half were repaired. The rest? “Fourteen things were not economically repairable; another 14 couldn’t be diagnosed or required special tools that weren’t available; and 19 needed a part ordered and will be repaired later.”

The (ahem) cassette deck brought in by Rob Sommerville was one of those items needing a part. “They took it apart and showed me what needed to be fixed, and gave me a lead on where to find that part,” said Sommerville. “So I’m leaving a happy person. It’s not working yet, but we have a way to fix it.”

NPQ needs a special category for these kinds of earth-saving, community-building, circular economy projects—which would include, if we had it, the libraries of things that have been emerging around the world.—Ruth McCambridge