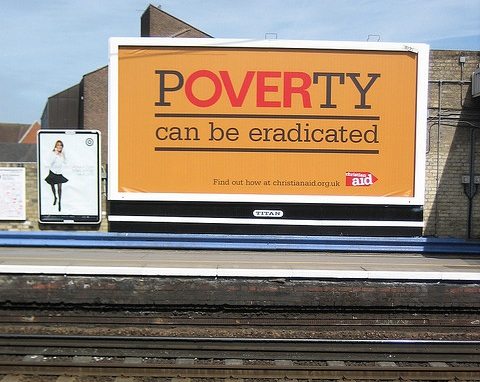 In case you missed it, last night was the first presidential debate, and the only one of the four that will focus exclusively on domestic issues. By 9:24 p.m. (ET), Obama and Romney had said “middle class” so many times that, had I been counting, I would have lost count. But I was waiting to see if either candidate would take note of the 46.2 million Americans living below the poverty level. They are kind of hard to ignore, this 15 percent of the American population trying to survive on an annual income of less than $23,050 for a family of four. How about supporting a family of four at $34,575, which is 150 percent of the poverty level? Did either candidate appreciate the challenge faced by tens of millions of Americans who are, by any stretch of the imagination, nowhere near being middle class?

By around 9:30 p.m., the candidates had touched on Medicaid and Food Stamps, programs for the poor, but they couldn’t utter the word. At 9:42 p.m., the president was whacking Romney’s (or perhaps Paul Ryan’s) plan for voucherizing Medicare (though the president voiced no similar reservations about education vouchers), seemingly using seniors as a stand-in for the word poverty. Romney raised the real problem of waves of doctors and institutions deciding not to accept Medicare patients, though neither debater actually got near voicing an answer. The president scored some points on Romney’s attempt to defend and distinguish Obamacare from his Massachusetts program, but neither addressed what would happen to the tens of millions of people who will be without coverage even after Obamacare goes into full effect, either due to their immigrant status or their being low income people in states that are refusing the increase in Medicaid coverage.

At 10:17 p.m., one of the candidates—perhaps surprisingly, Romney—finally decried that one out of every six people in the U.S. are living in poverty. Romney noted 47 million people on Food Stamps, 23 million unemployed, and half of college graduates unable to find work. The president almost added poverty as an issue toward the end of the debate when he said he was open to ideas from Democrats and Republicans if they were “giving ladders of opportunity into the middle class.”

As debate moderator, PBS’s Jim Lehrer could have asked about poverty—or immigration, or lots of other domestic issues in this debate emphasizing domestic issues. Instead, he floundered with issues and focused on asking the candidates if they disagreed with each other rather than pushing them to explain more or address issues in greater depth.

Score one for the forces of ignoring poverty as a social issue. Poverty must be too divisive a political issue to be uttered. So are so many other issues that nonprofit leaders believe are important for people in need. We don’t need to offer our pronouncements about who won or lost the first presidential debate. But we are compelled to suggest that the candidates and future moderators get down to the issues that affect people in an economic freefall that has been little removed from a full-fledged economic depression. We must also conclude that the nonprofit sector has to step up its game. If nonprofits have questions they want the candidates to address, the message didn’t get through to Lehrer, Obama, or Romney. –Rick Cohen