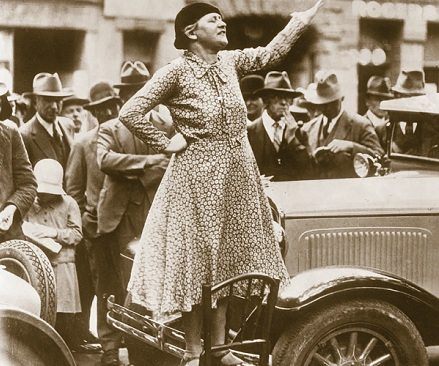 FROM THE ARCHIVES. We are happy to reflect that the kind of leadership we said was necessary in this article has, in fact, emerged in the years since through various social movements and stakeholder actions.

The Nonprofit Quarterly contends that the main purpose of nonprofit and nongovernmental organizations is to promote civil society. It does so by providing forums for people to take collective action and to involve themselves in activities to improve society overall. This is the d distinction; the d is for democracy. And that’s the framework for our consideration of the issue of leadership in the nonprofit sector.

While it is clear that we all want and need nonprofit organizations that are well managed, reducing our role to efficiency and solid administration not only takes a pass on our sector’s higher calling; it chooses the safest, least creative path, a path that is unlikely to lead us out of many of our current social quagmires. Yes, there is an inherent tension between management and leadership work, but we must use that tension to come up with our most imaginative answers and avoid shrinking our organizations further into the background. That requires some good old-fashioned guts.

You have heard this before: leadership is different from management. For one thing, it differs from management in its degree of dangerousness. Ronald Heifetz asserts that taking leadership is inherently risky. It generally means you have moved out of a safe zone of anonymity and accepted opinion. You may be targeted for character assassination, derision, even “removal.” As Heifetz and Linsky say in their book Leadership on the Line, you are now subject to being “marginalized, diverted, attacked or seduced.” Seduction for nonprofits is often in the security of our relationships with people in power and in the predictability of our institutions. Most of us in nonprofit leadership positions are used to balancing the tension between stakeholder interests and acutely aware of the vulnerability of our organizations.

Most nonprofits encounter moments when they are called on to make choices that may remove them from the realm of the accepted. If you take leadership in a situation that needs change (a good description of most of our environments), you are there to create discomfort with the status quo. Leaders learn how to work creatively with that discomfort and help others to do the same.

Does sustaining public opposition build character? Unknown, but the willingness to risk is a necessary leadership quality. The fear of adverse consequences (damaging an organization’s fundraising, board tranquility, or administrative consistency) can cause self-censorship out of a desire to stay in a comfort zone. But when leaders fail to leave that zone, it is difficult for them to judge the true risk or the potential gains.

When we talk about great leaders, it often brings to mind a hero—someone leading a charge or a movement or a country forward—but the sector’s language is sometimes at odds with that image. We tend to bandy the word leadership about as though it means nothing. We use the word leaders when we are talking about very ordinary, run-of-the mill functionaries—people who keep their heads down and engage only in advocacy to ensure that their next contract doesn’t get cut—or people who attend fancy chicken dinners with other people who attend fancy chicken dinners.

But real leadership takes personal heroism. The more “different” you are from the norm of those in power, the more you have to push your way into the dialogue to pose alternate ways of believing and doing. When leaders insist that the current way of doing something is wrong, derision is often the first line of attack, with defenders of the norm pushing those who speak out to the margins. This can be acutely uncomfortable as you try to keep track of whether you have placed yourself too far out to have traction. In other words, for those of us without money, leadership can be tough emotionally unless we are “true believers” and are surrounded by others who share our convictions and are acting in concert.

But of course, not all leaders take us to good places. Human beings have failings and flaws and they can be fatal—if not for them, then for the rest of us. There is a thin line between self-perceived heroism and narcissism, especially if you are charismatic. Charisma is magnetism; it is a gift of personality that can be used well or poorly. It attracts others to you on whatever road you travel. Often we think of it as evidence of powerful beliefs, but those who have it almost certainly understand its usefulness—whether for good or for ill.

Peter Senge has discussed the deficits of the traditional single-leader model. “Especially in the West, leaders are heroes—great men (and occasionally women) who rise to the fore in times of crises,” he writes. “At its heart, the traditional view of leadership is based on assumptions of people’s powerlessness, their lack of personal vision and inability to master the forces of change, deficits which can be remedied only by a few great leaders.”

Some have suggested a new way of defining leadership that focuses less on the search for that special charismatic someone and more on the ability to help build powerful collective will. A less individualistic approach, the post-heroic leadership model recognizes the creative energy each participant can bring to an effort and places a value on a leader’s ability to bring that to the fore.

Post-heroic leadership assumes that greater success comes with a greater distribution of power and responsibility in a system that focuses on a goal and a vision. By extension it also assumes that information and direction setting need to be shared.

If information, decision making, and critical contacts were shared, would we be so hysterical about a lack of “bench strength” in our organizations? This is not rocket science; as Peter Drucker remarked in a February 2004 Forbes article, what we are really talking about here is nothing more than hard work.

So let’s stop the interminable discussion about how we can fill the leadership void, and let’s do the hard work to move out of that much-bemoaned position of isolated executive into a place of leader among leaders. Every one of us should view himself as a mentor who has a thing or two to learn from our mentees. Every one of us should step away from “gatekeeping” between our boards and staff, and every one of us should invite constituents into the discussion—especially when it comes to direction setting. In this context, we must invite people to develop “civil-society skills” and the appetite and habits of activism. Otherwise, we risk neglecting our strategic advantage because the power base of most nonprofits lies in their ability to show active support among a constituency. To be comfortable doing so, we must ensure that members have the information they need and understand how things work in government and among potential institutional partners.

And so the skills of post-heroic leadership are necessarily somewhat different, although not entirely. We have not been living in brave times or in times where many people believed that they could necessarily make a difference in the country’s future. Above all, nonprofit leaders need to impart each person’s leadership potential over and over and see their leadership as actuated only when that message—“We can make [health care, underemployment, xenophobia, or community safety] different”—has stuck and is rippling out.

In this issue, Bill Traynor discusses how the change from big-chested leader to big-eared leader actually looks and feels and can be created specifically in community building. He advocates looking closely at every element of our practices, which in many cases have been neutered from the building of a persuasive collective voice to something akin to ineffectual and insincere mutterings. Nonetheless, in the era of virtual organizations, networks, and a breakdown in people feeling represented by representative democracy, an extraordinary opportunity has opened up as well.

It is our sincere hope that the current leaders of this sector will step up to what looks to be a truly historic challenge. In the development and promotion of broadly held leadership, nonprofits can break new ground and put the d back in democracy.