Preserving UC Library Becomes a Lesson in Governance and Fundraising 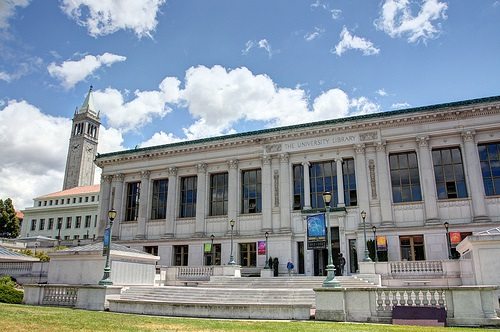 It is well known that the state of California’s dramatic and well documented budget cuts during the past few years have forced public higher education institutions to cut back on student aid and other institutional programs in order to make up for lost funding. According to Inside Higher Ed, a less-well-known story within the context of the ongoing struggles of California’s state institutions is that the library system at UC Berkeley was hit particularly hard as a result of mounting challenges with facilities and collections maintenance and cutbacks to career librarian and support staff positions. With the university community reviewing two options—neither ideal—as possible solutions, the faculty and administration opted instead for a dramatic third option, made public at the end of January: to keep all 25 of the university’s libraries staffed and open. The decision, which is based on a new funding plan, is significant not only for the range of people from the campus community involved in the process, but also for the commitments by faculty and administrators to stand behind the plan—in some cases, with supplementary support from their own campus budgets.

Commenting on the decision and the process used to arrive at it, Tom Leonard, university librarian, told Inside Higher Ed by email that it was an example of “Berkeley’s commitment to shared governance, including undergraduate students.” Referring specifically to the value of the participation of current undergrads in the process, and by extension to the future of the institution, he added, “They met with faculty members and administrators to discuss their library needs.”

Essentially, the library’s new funding plan, which will take effect next year, “calls for discretionary fund transfers from elsewhere in the university budget and contributions from individual faculty members’ research money.” As part of the agreement, the library is also responsible for drawing $1 million from reserves and cutting $1 million from its budget annually.

The campus community has approved the creation of a new fundraising effort, the Campaign for the Berkeley Library, with the goal of raising approximately eight million dollars annually to maintain library buildings and strengthen collections. Reflecting on the importance of this institutional commitment to the library’s future, Lynn Jones, a reference and instruction librarian at Berkeley, shared her view with Inside Higher Ed that “libraries—outside of academic departments—lack a natural constituency for donations, even though they’re a common good.”

UC Berkeley has already had some success with its creative approach to development efforts, such as with a recent crowdfunding effort to benefit student aid programs, so it will be interesting to follow how this latest initiative fits into the larger picture of the institution.—Anne Eigeman

More about: Arts and CultureEducationHigher Education