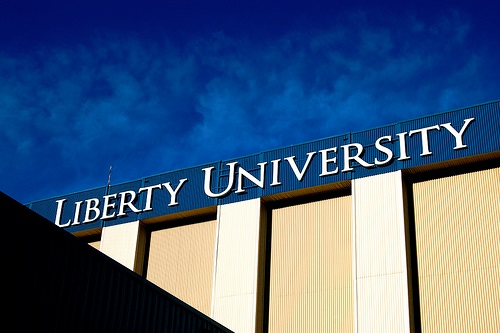 What fabulous optics for Ted Cruz’s announcement of his intention to become President of the United States! The 11,000 millennials (required to attend, else they get hit with $10 fines) surrounding the Texas senator, the TED-talk format for Cruz to wander across the stage away from a dais or notes, the obviously television-friendly setting that allowed the Cruz announcement to be broadcast live on some cable networks, all provided generously by Liberty University, the religious college in Lynchburg, Virginia, founded by Moral Majority icon Rev. Jerry Falwell. Writing for the Washington Post, Michelle Boorstein suggests that Liberty University has now become a required stop for Republican candidates, not just due to the setting and accoutrements, but the university’s mission, which makes Creationism, political conservatism, and support for free enterprise theological pillars of a “Christian worldview.”

With Cruz first out of the gate among Republican contenders and a long line of competitors ready to follow, will Liberty be the venue for their announcements as well? Will Rev. Jerry Falwell Jr., who has run the institution in place of his father who died in 2007, offer the mic to Hillary Clinton, Martin O’Malley, or Joe Biden should these Democratic apostates want to make their announcements there? Wouldn’t you just love to see Biden’s happy face in that setting?

Liberty University, a tax-exempt entity, has a slight problem if it doesn’t make itself open to anyone and everyone who wants to make it the backdrop for their presidential campaigns’ opening salvos. In a letter to IRS commissioner John Koskinen, Barry W. Lynn, the executive director of Americans United for Separation of Church and State, charged that “it is difficult to view Liberty’s choice to allow Sen. Cruz to hold a campaign rally on campus as anything less than an endorsement of his candidacy, notwithstanding the university president’s perfunctory disclaimer to the contrary.”

Pointing out that Liberty clearly knew that Cruz intended to announce his presidential campaign from the venue, Lynn added:

“It appears that Sen. Cruz chose Liberty because it offered him certain advantages, and Liberty was more than happy to work in coordination with the senator to assist his cause. Sen. Cruz wanted potential donors and conservative voters to believe he has the support of thousands of young people at the largest Christian university in the world. And Liberty helped sell that idea by making attendance at the senator’s rally mandatory for students.”

Liberty officials have argued, as the NPQ Newswire reported, that Cruz spoke at a thrice-weekly convocation that is mandatory for all students, no matter who happens to be speaking. In fact, they said that the speaker who originally had been scheduled was Virginia Governor Terry McAuliffe, a Democrat, who withdrew in favor of some other time. However, knowing that Cruz was announcing, Liberty could have chosen a time and place at which students would not have faced fines had they chosen to skip the event and avoid having to wave the little American flags distributed by the Cruz campaign. Liberty knew what Cruz wanted and gave him the venue for maximum political effect.

Liberty’s mandatory convocation “amounted to a campaign rally for Sen. Cruz,” according to Lynn, a potential violation of the school’s tax-exempt status which prohibits partisan political activity. However, Lynn noted that the IRS has been pretty lackluster in investigating other such violations, which “has had the apparent effect of leading Liberty and other tax-exempt entities to believe they can ignore federal law.”

If past is precedent, Koskinen is unlikely to act, or if he does, it will be when there is a new occupant in the White House after the 2016 elections. Partisan “politicking” on the part of churches and faith-based nonprofits like Liberty has become quite commonplace, to the detriment of the important nonpartisan, nonpolitical identity of the nonprofit sector.

There is a certain irony in the snubbing by Cruz and Liberty of the federal prohibition against partisan political activity by tax-exempt entities. During his announcement, Cruz asked his audience to imagine what it would be like with a new president, presumably himself, in the White House come 2017, with this interesting suggestion: “Imagine abolishing the IRS…abolishing the IRS ain’t all that tough!”

Aware that he might be violating a rule of either Liberty University or the IRS, or perhaps both, in the last paragraph of his speech before making his official announcement, Cruz added the following:

“If you’re ready to join a grassroots army across this nation, coming together and standing for liberty, I’m going to ask you to break a rule here today and to take our your cell phones and to text the word CONSTITUTION to the number 33733. You can also text IMAGINE, we’re versatile. Once again, text CONSTITUTION to 33733.”

The NPQ Newswire texted that number on March 26th and got this as its automatic response: “Thanks for opting in to get updates. More info visit tedcruz.org.” The website, tedcruz.org, is the Cruz for President website.

It’s almost as though Cruz, Falwell Jr., and the university were saying, “In your face, Koskinen!” On this issue, where the IRS has shown scant willingness to push before, will the Service show some mettle now? Or will we see a trail of additional Republican, and, to be fair, Democratic, Libertarian, Green, and Socialist presidential candidates at Liberty University’s Vines Center for their presidential announcements in front of a millennial audience with compulsory attendance?—Rick Cohen