Progress on the Minimum Wage in 29 States and DC 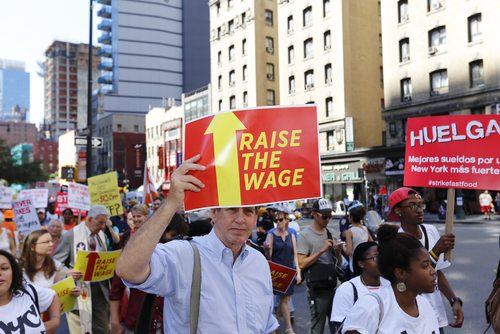 A minimum wage of $8 or $9 an hour is hardly going to lift a family out of poverty, but boosting the minimum wage in some states to that level—above the $7.25 mandated as a wage floor by federal law—may mean a little less financial stress for the working poor. The nonprofit National Employment Law Project has produced a list of all of the states that will have minimum wage requirements higher than the federal requirement sometime in calendar year 2015:

Nonprofits like NELP have been doing the necessary research to show that raising the minimum wage to $8, $9, or $10 an hour will not cause the massive job losses that opponents suggest. But the campaigns to win minimum wage increases in states and localities are the responsibility of community-based nonprofits that know their local economies and politicians. Not one of these new minimum wage rates would have occurred had it not been for persistent nonprofit advocacy. That’s what it will take to make progress in the other 21 states and in municipalities across the nation.—Rick Cohen