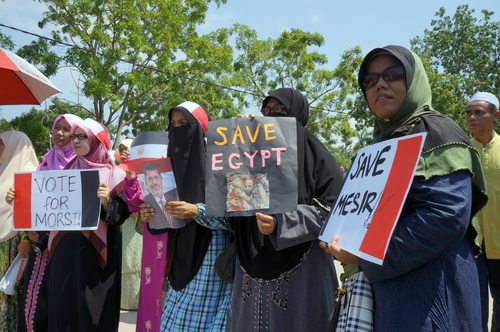 According to Human Rights Watch:

“Egypt is obliged to respect and ensure the right to freedom of association, set out in article 22 of the ICCPR and article 10 of the African Charter on Human and People’s Rights. Egypt may only limit this right through regulations ‘prescribed by law and that are necessary in a democratic society.’ Any limitation should respond to a pressing public need and reflect basic democratic values of pluralism and tolerance. ‘Necessary’ restrictions must also be proportionate—that is, carefully balanced against the specific reason for imposing the restriction and not discriminatory, including on the grounds of national origin, political opinion, or belief.”

Despite those guarantees, Human Rights Watch warns about a draft law on associations now being circulated among that country’s nongovernmental organizations. The law would “give the government and security agencies veto power over all activities of associations in Egypt” thus negating Egyptians’ right to freedom of association guaranteed by the Egyptian constitution and international law.

The draft law “would make all activities of associations, including any decisions made by the board, subject to government veto. The government and security agencies would be allowed to investigate the premises of any association and restrict foreign funding and cooperation with groups abroad. They would also be able to disband already exiting groups, pending a court order, and deny a license to newer groups if it decided their activities could ‘threaten national unity.’”

Human Rights Watch writes that the law would require “international organizations to obtain permission in advance from an Egyptian government committee containing Interior Ministry and intelligence service representatives before carrying out any activity in Egypt. The committee would be able to rescind that permission at any time, for any reason.”

“This law is not about regulating nongovernmental organizations—it’s about throttling them and robbing them of their independence,” said Joe Stork, deputy Middle East and North Africa director of Human Rights Watch. “These provisions would extinguish a crucial element of democracy in Egypt.”

The draft law will either be introduced in the country’s next parliament, or it could be promulgated by presidential decree, as occurred last November with a highly restrictive law on assembly.

One activist comments, “Our time is coming…There will be a crackdown on NGOs, and we all expect to end up in prison soon. We know this is our fate, and we have accepted it.”—Ruth McCambridge