Protests across U.S. in Wake of Trump Election 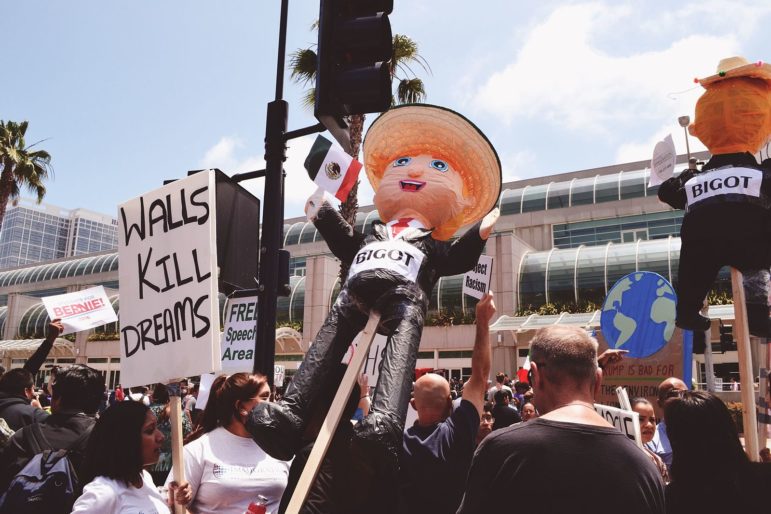 The liberal advocacy group MoveOn.org issued the following invitation on its website home page yesterday, and people across the U.S. responded:

Protests were reported in major cities from New York to Los Angeles, Chicago, and Portland, OR, with local media noting smaller events in other cities. Protests ranged from several thousand people in Oakland to a few in Sioux Falls, South Dakota. We suspect there were many local events that escaped the notice of the major news media.

Reports of the protests indicate they were overwhelmingly peaceful marches. There were a few small fires set in Oakland, where two police officers were injured and two police cars were damaged. Five people were shot near the protest in Seattle as a gunman left the protest and turned to fire into the crowd, but it appears to have “stemmed from a personal argument,” according to police, and was not related to the protest. Thirteen protesters were arrested in Los Angeles as they attempted to block traffic on major streets.

There were pre-election fears that a Hillary Clinton win on Tuesday would result in mass riots by pro-Trump supporters incited by Trump to challenge the validity of the election results. Obviously, Trump’s victory made any prospect of Trump protest moot. It’s not surprising that MoveOn.org’s call for peaceful protest was heeded in so many communities in the wake of a divisive race, and it’s reassuring that virtually all of those protests were passionate, yet peaceful, as their organizers intended.

While the protests were focused, in part, on the present fact of Trump’s victory, they were also designed to remind us all that, in the words of Ted Kennedy’s concession speech to Jimmy Carter in 1980, “For all those whose cares have been our concern, the work goes on, the cause endures, the hope still lives, and the dream shall never die.”—Michael Wyland