In the United States, the entire apparatus of the Republican Party has been searching since the era of the Bush (II) administration to find instances of voter fraud to justify efforts to make voting more difficult for people (38 states have proposed making government-issued photo IDs a prerequisite for voting, for example)—making voting more difficult for the poor, the elderly, and studentsbased on the axiom that the more people who are able to vote, the more likely they vote Democratic. During a period of the Bush Administration, a total of nine—yes, nine—instances of voter fraud were discovered in the U.S., outnumbered by the 352 people killed because they were struck by lightning and the 32,299 reports of UFO sightings: 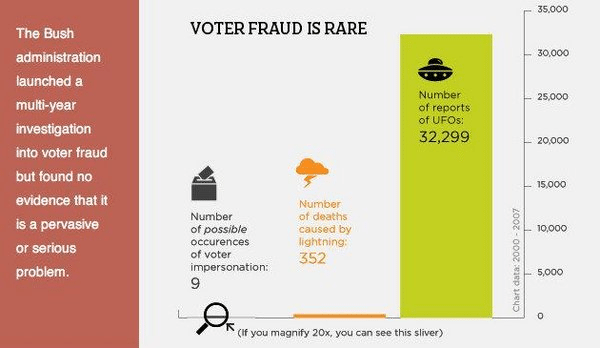 In the December 4 parliamentary elections in Russia, an organization called the Golos Association counted 1,300 election “irregularities”, though NGO (non-governmental organization) that does the lonely job of election monitoring in Russia hardly had staffing and apparatus comparable to the Republican Party, attorneys general, and DAs in the United States. The tainted Russian elections (in which Vladimir Putin’s United Russia party, despite the obvious voter fraud, slid to controlling almost 50 percent of the Russian parliament) led to unprecedented protests drawing as many as 100,000 people (Russian authorities put the count at 25,000) into the streets in Moscow on Saturday. This followed a week of smaller scale protests in Moscow and other cities, resulting in all in nearly as many arrests as protesters.

Not to overdramatize the protests’ unlikely ability to topple Putin (something that the protesters are not calling for, at least at the moment, instead favoring demands such as new elections, the approval of alternative, democratic political parties, the release of people jailed during the week for participating protests, and the resignation of the nation’s election oversight official), but are the election protests in Moscow and over 80 other cities a step toward a “Russian spring” following in the footsteps of the Egyptian protesters in Tahrir Square who demanded and won the overthrow of Hosni Mubarak?

Unlike the Egyptian Ministry of the Interior, the Russian government, nominally headed by Putin puppet Dmitry Medvedyev, did not do anything stupid or violent, allowing Saturday’s protests to proceed peacefully. But the government has launched a virulent attack against the election-monitoring Golos (Russian for “vote” or “voice”) as a puppet organization paid for and controlled by the U.S. government through funds provided by the U.S. Agency for International Development (USAID). The “Voice of Russia” declared Golos to be an American organization required to provide USAID (a part of the Department of State) “an account of each kopeck, or rather, cent received from the US”. Russia’s English-language RT television network published e-mails between USAID and Golos discussing USAID support for the NGO, including a payment structure that RT alleges was to pay Golos per reported election violation. USAID has actually long-supported Golos, which has never denied its funding from outside the Russian borders, given how difficult it is to raise money for an entity seen to be a critic of the Putin/Medvedyev regime). Putin’s people harassed the head of Golos during a recent trip, fined the organization for its own purported election irregularities, and charged it with creating phony press credentials.

It is important to remember the bravery of the nonprofits and protesters in other countries. The leadership of the Golos association knows they are marked and vulnerable. While the authorities let the Saturday protest rally proceed, who knows when the rulers of this “petro-kleptocracy,” as the brilliant Niall Ferguson described today’s Russia, decide to return to their tough-guy governmental persona, do more than simply harass Golos staff, and get violent with protesters? What’s happening in the streets of Moscow should remind Americans about the importance of voting rights here and motivate them to stand up against bills to restrict democratic rights in this country.—Rick Cohen