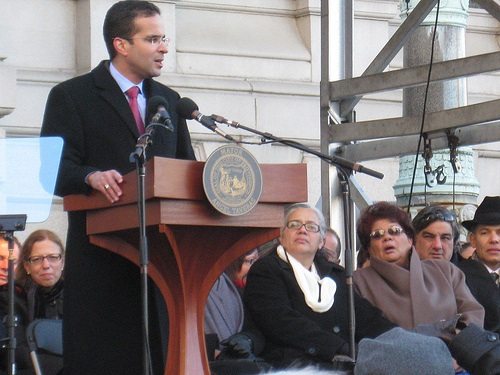 In his state of the city address on Tuesday, Providence, R.I. Mayor Angel Taveras offered a largely upbeat message: “We have survived the worst of our fiscal storm, but we must remain vigilant…there are clear signs of hope on the horizon.” This was certainly an improvement over last year’s message, when Taveras described the city as “staring into a black hole.”

When Taveras took office, he had encountered a structural deficit of $110 million. The turnaround is largely seen as due to two factors: renegotiated pension agreements with public workers’ unions, and new payment in lieu of taxes (PILOT) agreements with the city’s largest education and health nonprofits, including Brown University, which agreed to roughly double its annual payments to the city last year and will pay $31.5 million more over the next eleven years.

The Providence PILOTs agreements are estimated to be worth $48 million over the next decade and must still be ratified by the Providence City Council in early February. However, after some heated exchanges, the mayor and the tax-exempt institutions have their understanding in place.

This situation provides a counterweight to the notion that PILOT programs make little substantive difference to city budgets. In many situations, the payments may be little more than a pittance but in this case, the PILOTs appear to have been critical. Among the other nonprofits paying in were Care New England, CharterCARE Health Partners, Johnson & Wales University, Lifespan, the Rhode Island School of Design, and Providence College.

With a budget of $160 million, Providence College announced it will up its payment to the city from $264,000 to $580,000 – totaling an additional $3.84 million over the next decade. In return, the city will provide certain considerations having to do with parking and other issues. The payment will comprise .3 percent of its annual budget. Brown University will pay a heftier 1.2 percent of its annual $663 million annual operating budget.

According to WJAR, the Providence NBC affiliate, the city is expected to end this year with a balanced budget, though Taveras notes that there is more work to be done on refilling reduced reserves and improving its credit rating. –Ruth McCambridge