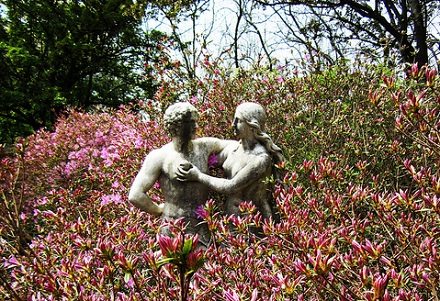 Louisiana has a new school voucher program funded by taxpayers. The taxpayers will reportedly find themselves paying religious schools to teach students creationism and to reject evolution.

As an example, the Associated Press cites the online handbook of Ascension Christian School, which explains that students “will be expected to defend creationism through evidence presented by the Bible versus traditional scientific theory.” “Household of Faith” schools Ascension (which will get 10 voucher students) and Faith Academy (which will get 41 voucher students) will receive a total of $250,000 in voucher payments from the state.

At Northlake Christian High School, 18 voucher students will be taught “a creation worldview of life origins” according to the curriculum of the biology teacher. Slated to receive $375,000 in voucher payments, the Northlake teacher has rejected fossil evidence of evolution on a website, stating that such evidence is incompatible with the Bible.

The Ascension, Faith, and Northlake science curricula might make it tougher for voucher students to pass the state’s required science test, which Superintendent of Education John White says “measures evolution;” that’s an odd phrasing, but presumably he means that evolution is on the state test. It’s unclear to us whether a student could bomb any question(s) related to evolution but still pass the test overall.

Two elements of this story are worth noting. First, Louisiana once had a law mandating equal time for teaching creationism in public schools, but the U.S. Supreme Court nixed it as promoting religion. With 19 religious schools in the voucher program apparently pledged to teach creationism, doesn’t the voucher problem look like a circumvention of the Supreme Court decision? A little obvious, don’t you think?

Second, article notes that Louisiana Gov. Bobby Jindal, whose undergraduate degree was in biology, supports the teaching of creationism and says that the theory of evolution has “flaws and gaps.” Jindal, a high-profile Republican, is no dummy. To the contrary, as a kid, Jindal was named to the USA TODAY All-USA Academic Team in 1992. Although he was accepted to both Harvard Medical and Yale Law, Jindal instead became a Rhodes scholar at Oxford. Do you really think that Jindal doesn’t believe—check that, doesn’t know—that evolution is fact, not a speculative hypothesis? Jindal may believe in free market economics, but there’s not a chance that he really believes in creationism. As for his comments about evolution’s “flaws and gaps,” it’s true that we learn new things about evolution all the time. New discoveries fill in gaps in the record, but that hardly means that the theory (not hypothesis) of evolution doesn’t work and merits being replaced by creationism.

Using taxpayer-funded vouchers to support nonprofit and religious schools to teach creationism amounts to a misuse of public funds in support of institutionalized ignorance.—Rick Cohen