Pussy Riot’s Symbolism and Why It Matters 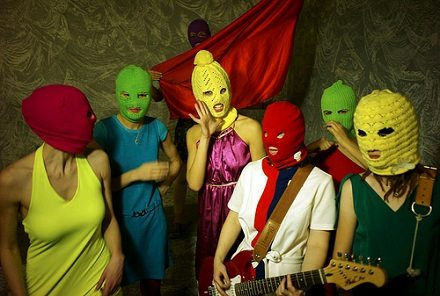 For those who treasure freedom of speech or those who don’t treasure it enough to be on constant alert, consider the fate of three feminists, all in their twenties, who are members of the Russian punk rock band Pussy Riot. The women, Yekaterina Samutsevich, Maria Alyokhina, and Nadezhda Tolokonnikova, pled not guilty to hooliganism yesterday in a case that is becoming a symbol of Russian President Vladimir Putin’s increasingly intolerant attitude towards dissent. The three have been in custody for five months already and are facing up to seven years imprisonment. Their alleged crime is dancing in brightly colored clothing and balaclavas near the altar in Moscow’s Cathedral of Christ the Savior, where they appealed to the Virgin Mary to “chase Putin out!” The action was intended to protest the relationship between the Russian state and the Russian Orthodox Church.

This is not the first political action taken by the band and, according to the Mail and Guardian, there is a larger collective of women behind the band beyond just Samutsevich, Alyokhina, and Tolokonnikova. Carole Cadwalladr writes of the Red Square concert that first brought the band to the world’s attention in January: “Russia’s leaders have always understood the potency of the visual imagery of power. Of hammers and sickles. Of nuclear warheads and a well-muscled man doing manly, bare-chested outdoor pursuits. And, in the latest instance: of five young women in brightly coloured balaclavas jumping up and down in the symbolic heart of the Russian state: Red Square.”

Some have called the case against the band members Putin’s “watershed.” The case has caused divisions among Russians who believe the government has overreacted and those who see the band’s act as deeply offensive. The Russian Orthodox Church has been very supportive of Putin throughout his tenure and it was that issue in particular that the band was protesting after Patriarch Kirill had indicated his support for Putin in the March election. A prosecutor described the action as “a deliberate and carefully planned action to abase the feelings and beliefs of the followers of the Christian world and denigrate the spiritual foundations of the state.” One witness, Lyobov Sokologorskaya, testified that the band’s actions were satanic and had caused suffering: “I experienced bitterness and pain and feel it to this day. It all looked like devilish skipping. They raised their legs and everything that was below their waists was visible. And that on the ambo, in front of the heavenly gates.”

Acting as a spokesperson for the church, Vsevolod Chaplin said, “God condemns what they’ve done. I’m convinced that this sin will be punished in this life and the next. God revealed this to me just like he revealed the gospels to the Church. There’s only one way out: repentance.” But defendant Nadezhda Tolokonnikova states, “We aren’t enemies of Christians…Our motives are exclusively political…I am prepared to accept that we made an ethical mistake…We admit our political guilt, but not legal guilt.”

The BBC notes, “The Russian Orthodox church has always walked a moral tightrope throughout its long history, and has been criticized for its involvement with successive leaders from the Tsars to Stalin, and now, Vladimir Putin.” In an interview with Cadwalladr, Ilya Oskolkov-Tsentsiper, the co-founder of the Strelka Institute for Media, Architecture and Design, says that Pussy Riot symbolically fits Russia’s tradition of mad saints: “This idea that it’s only the crazy, half-witted fool who can tell the truth to the nation and to power. There is something that all Russians know even if they’re not aware of it. In Russia, you never call it St. Basil’s Cathedral, it’s Vasily Blazhenny, Vassily the Mad. And this is what these girls are. The truth-tellers to the Russian nation.”

Mad young feminist truth-tellers with a sense of theater and unstinting political convictions—yes, very dangerous. Please make some noise for these women! Do not let them be used as examples of why not to speak out. –Ruth McCambridge