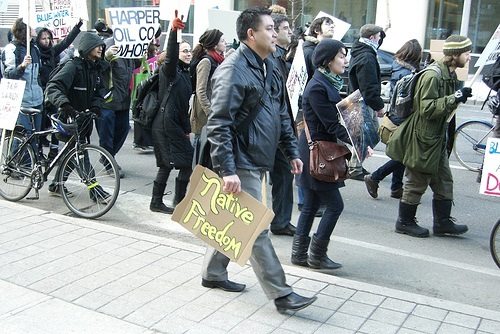 North of the longest border in the world shared by two countries, the Canadian version of the Internal Revenue Service—the Canada Revenue Agency—is conducting what the CBC describes as “extensive audits on some of Canada’s most prominent environmental groups to determine if they comply with guidelines that restrict political advocacy.”

Environmental groups have been targets of Canada’s Conservative Party politicians in controversies concerning their opposition to the nation’s increasingly vigorous tar shale mining and shipping of oil. A couple of years ago, Conservative members of the Senate charged that environmental groups were funded by “foreign foundations,” though a subsequent investigation of foreign funding of Canada’s 85,000 registered charities demonstrated that the charge was false.

The Canadian audit is different than the controversial IRS audits of Tea Party groups. The latter were generally seeking 501(c)(4) social welfare organization status approvals; that is, to be social welfare organizations, which would not have entitled them to solicit tax-deductible charitable donations. The Canadian audits concern already-extant charities to determine if they have complied with government regulations that restrict charities’ program expenditures devoted to political activity or advocacy to no more than 10 percent. Like U.S. charities, Canadian charities are prohibited from engaging in partisan political behavior.

Canada Revenue is serious about this review. The Finance Minister has allocated $8 million to the review of these groups, which the groups believe is meant to silence them on oil and gas issues. If Canada Revenue finds them in violation of the 10 percent rule—or having engaged in partisan political activities—the groups could lose their charitable status, which would have the effect of shutting them down.

The CBC describes the list of the groups undergoing audits as a “who’s who” in the environmental charity world: The David Suzuki Foundation, Tides Canada, West Coast Environmental Law, the Pembina Foundation, Environmental Defence, Equiterre, and the Ecology Action Centre. Although Sierra Club Canada is not on the audit list, Sierra’s John Bennett said the group is prepared to be hit with an audit in what he described as the Conservative Party’s “war against the sector.” The CBC reported that Environmental Defence has already heard back on the audit results and is appealing due to the CRA’s threat to pull its charitable status.

Finance Minister Jim Flaherty made his intentions relatively clear months ago. The CBC reports that he warned the public, “If I were an environmental charity using charitable money, tax-receipted money for political purposes, I would be cautious.” Canada Revenue says it doesn’t “target” specific charities or groups of charities for audits and doesn’t receive instruction from political leaders as to which groups might be audited. Experts suggest that audits often emanate from complaints about the charities; a representative of Tides Canada believes that complaints prompted its inclusion on the audit list. Ross McMillan, the president and CEO of Tides Canada, cited complaints about Tides Canada, the David Suzuki Foundation, and Environmental Defence from the pro-oil group, Ethical Oil, part of a campaign to challenge the environmental groups’ charitable status, as a possible source. The founder of Ethical Oil, Alykhan Velshi, now works or the Prime Minister’s office as director of issues management.

Although different than the IRS reviews of the Tea Partiers’ (c)(4) applications because Canada Revenue is auditing groups that have long been in existence, the political questions are similar. That is why so many liberals were taken aback by the IRS scandal here. When a tax agency is seen as conducting audits or reviews of charities based on their political stances, the reliability of the government’s audit and review process comes under question. If groups in the U.S. or Canada are violating the rules concerning political or potentially partisan engagement, then government action is warranted. If the actions are applied only to groups that are critics of the government in question and not to those that are allies of the ruling political party, then the process is suspect and needs to be depoliticized.—Rick Cohen