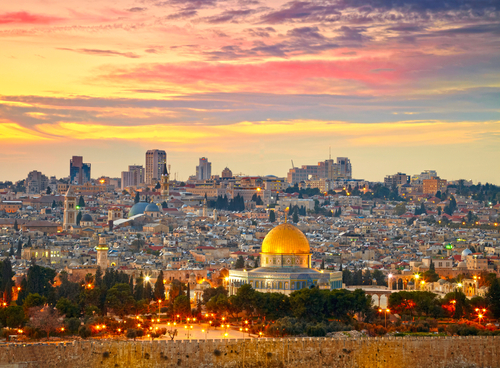 There is room in Congress for a wide variety of personalities. Last month, Roll Call’s “Heard on the Hill” column caught up with Rep. Derek Kilmer (D-WA), who confessed to being the nation’s biggest “Star Wars” fan (the movie, not the Reagan era space-based defense system), eager to see the development of teleportation, and proud of winning last year’s congressional jalapeno-eating contest.

Interestingly, Kilmer responded to HOH’s question about his #AskDerek Twitter series, in which he acknowledged that “it’s difficult to answer, ‘What should we do in the Middle East?’ in 140 characters or less.” The Middle East is apparently a significant concern of the congressman, reflected both in his travel and his recent introduction of a bill to increase military aid for Israel.

In checking the approved travel of Kilmer and his staff, we found six privately financed trips between 2013 and 2015 on the Legistorm database, one taken by Derek and Jennifer Kilmer to Israel in 2013 costing $18,987.34, and one taken by Jonathan David Marquardt Smith, apparently a staffer, in early 2014 costing $13,256.59. The Kilmer trip in 2013 was with 39 other Democrats for a total cost of $642,450. The Smith trip in 2014 was part of an entourage of 17 Congressional offices for a cost of $219,727. These trips were listed as privately financed and sponsored by the American Israel Education Foundation, the charitable arm of the American Israel Public Affairs Committee, the powerful pro-Israel lobby.

It shouldn’t be a surprise, therefore, to see Rep. Kilmer as the cosponsor of a new bill introduced in Congress this month to authorize $286 million for the development of a new Israeli missile defense program called David’s Sling, being developed by a joint venture of Rafael Advance Defense Systems in Israel and the Raytheon Company in the U.S. David’s Sling would function as an intercept system against missiles too far outside the scope of Israel’s Iron Dome system. Rep. Jim Bridenstine (R-OK) is Kilmer’s cosponsor for the bill.

“The first time I went to Israel, I saw firsthand what it was like for little kids to live under threat,” said Kilmer in explanation of his sponsorship of the bill. “As a parent of two girls I want to do everything we can to ensure that innocent civilians are protected from attacks. It’s important for us to bring this system online so we can help our ally in Israel and grow our economic partnership so we can better share innovative ideas and create 21st-century jobs in both countries.”

There is no doubt that it is difficult for children in Israel to live under the threat of missile attacks from Hamas in Gaza or Hezbollah in Lebanon. However, it is no less difficult for the children of Gaza, 504 of whom were killed in the 50 days of Israeli attacks on Gaza this past August and September and well over 1,000 left orphaned. Add in the tens of thousands of children who have lost their homes or had someone they knew or were related to killed in the warfare, and the result is traumatic.

Kilmer is certainly justified in looking to protect Israeli children from missiles. However, adding $286 million to the massive sum that Israel already gets from the U.S. taxpayer will not increase Israel’s security much over the long run. Dedicated work toward a lasting peace through a two-state solution will. The rejection of a two-state solution by Prime Minister Netanyahu, joined by most Republicans in the U.S. House of Representatives and many Democrats, is seen by many people as shortsighted and counterproductive.

What is galling, however, is the expression of concern about Israeli children in fear of the threat of missiles without a corresponding recognition and appreciation of the horrors of war that have been suffered by tens of thousands of children in Gaza. The American Israel Education Foundation’s trips for U.S. legislators probably don’t include stop-offs in Gaza to look at the Dresden-like conditions that Palestinian children have to live with after 50 days of bombing their homes and schools.—Rick Cohen