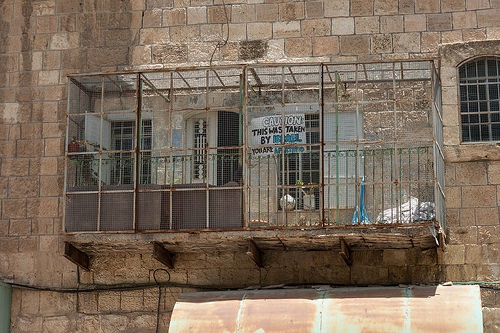 Josh Harkinson reports for Mother Jones that a global nonprofit called Avaaz has petitioned the Internal Revenue Service to revoke the charitable status of the Hebron Fund, a Brooklyn-based nonprofit that provides financial support to Israeli settlers in Hebron, a community in the Occupied West Bank. Not a particularly long-established group, much like other similar organizations, Avaaz functions as a venue for Internet-based organizing, using techniques such as petitions, online media campaigns, and lobbying governments, focusing on issue priorities established by Avaaz members. (The Avaaz webpage, when we looked at it on March 13th, claimed 41,513,085 members in 194 countries.)

The role of the settlements is very contentious, as they appear to be illegal under international law no matter what justifications may be used by the government of Israel to maintain its military occupation of the West Bank and the continued building of settlements there and in East Jerusalem.

Harkinson, and presumably Avaaz, asks “why American taxpayers continue to subsidize the Hebron settlers, accused by international observers of human rights violations that include thefts, battery, and murder.” Among those international observers are Human Rights Watch, the United Nations Office of the High Commissioner for Human Rights, and B’tselem, all documenting human rights abuses in Hebron conducted by settlers, to which the Israeli Defense Forces soldiers in the area turn a blind eye.

Harkinson quotes from an Avaaz official, outlining the complaint: “The Hebron Fund has supported, either directly or indirectly, a wide array of acts that are definitely not charitable,” says John Tye, the Avaaz legal director, and notably, a former U.S. State Department whistleblower. “They are basically using a small group of Jewish settlers in the West Bank to push Palestinians out of their homes. These settlers are arming themselves, they are engaged in military and paramilitary acts, some of them have connections to terrorism, and they are committing a wide range of crimes against Palestinians.”

As the NPQ Newswire noted in its coverage of American philanthropic support to organizations promoting Israeli Prime Minister Benjamin Netanyahu’s speech to a joint session of Congress, American taxpayers support a range of organizations that themselves support settlers in various West Bank communities. A 2012 study by Eric Fleisch and Theodore Sasson is one of the few studies we have seen to examine U.S. giving to Israeli organizations through the United Jewish Communities and the Jewish Federations of North America, various “friends-of” organizations, and pass-through intermediaries. Their analysis included U.S. donations to support the settlements broadly (through the One Israel Fund and the Central Fund of Israel, for example) as well as funds for specific settlements (such as the American Friends of Ateret Cohanim, the Friends of Ir David, the American Friends of Ariel, and the Hebron Fund, to name a few).

Harkinson’s description of what is happening in Hebron reveals much about the dynamics of Israeli settlements, the displacement of Palestinians from homes, the IDF’s closing off of parts of the from Palestinians, and the hostile acts of the settlers themselves. It is a strategy that is followed in other settlements, the eviction of gradually increasing numbers of Palestinians and opening up more West Bank and East Jerusalem sites for settlements. The pace of Israeli settlement in the Occupied West Bank is not slowing. There are some 350,000 settlers living there, up almost a quarter million from a decade ago. Nick Kristof wrote in the New York Times recently about settlers’ displacement of Palestinians from agricultural lands in the West Bank. Although the Netanyahu government gives lip service to a two-state solution to the Israeli/Palestinian conflict, it looks to just about everyone that the settlements are not temporary, but meant to be permanent as part of a strategy that sounds more like a one-state future.

The Avaaz complaint focuses on the Hebron Fund’s support of one settlement and, as per Harkinson’s article, emphasizes the human rights violations of the settlers as the basis for the request to IRS that the Fund lose its charitable status. However, the bigger question is whether it is right for American taxpayers to receive charitable deductions for supporting organizations whose objectives and programs not only constitute human rights violations but violate international law regarding one nation’s occupation and usurpation of another.

Sadly, the review ought to be expanded. There are a number of “American friends” organizations that purport to support religious education in Israel, including religious schools in West Bank settlements, and many do. But remember when Jack Abramoff, the since-jailed lobbyist, used his Capital Athletic Foundation to make donations to a religious school in one of the settlements, Kollel Ohel Tiferet, only to have the funds used, with Abramoff’s knowledge, for purchasing paramilitary equipment? The pictures in Harkinson’s article are striking and disturbing, particularly the “Gas the Arabs” graffiti, but the IRS might want to consider how much these tax-deductible donations are helping make permanent illegal Israeli settlements in the Occupied West Bank, not just the human rights violating behavior of some of the settlers themselves.—Rick Cohen