Raising the Minimum Wage Helps Everyone: Why It Should Be an Advocacy Priority for your Nonprofit 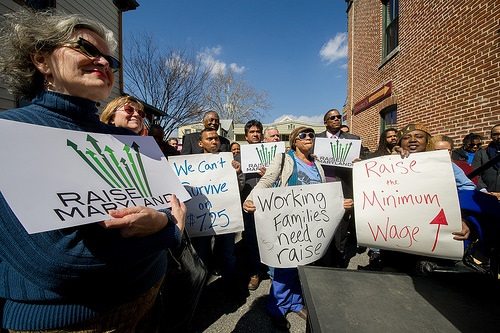 Classic economics argues that raising the minimum wage always leads to greater unemployment, because at a higher wage price, there will be less demand for labor and therefore excess supply. I’d pay the kid next door $7 an hour to rake leaves so I can watch football, but if I have to pay him $10, I’ll just rent a leaf blower and do it myself. Walmart might not think greeting customers is worth more than $8 per hour, so if minimum wage goes to $9, the greeters lose their jobs.

There is only one problem with this elegant theory: The metadata from hundreds of studies show no discernible effect of increasing minimum wage on employment. And it is undeniable that raising minimum wage increases the earning power, and therefore the general welfare, of low-wage workers.

So what’s really happening? There are a few mechanisms working in tandem that together negate the unemployment expectation. One is that since all employers have to raise the wage, they are able to pass the extra costs on to consumers without losing out to the competition. And since wages are often a small component of consumer costs, the inflation can be imperceptible to consumers. Any lost demand is offset by the fact that the low-wage workers have more disposable income that they will immediately spend, causing a mini-economic stimulus.

But more crucially, classic economics wrongly perceives workers as instantly replaceable automatons whose individual productivity is not influenced by their wages. This theory fails the reality test. A typical bowling alley has a manager, probably an assistant manager, and several low-wage workers tending the lanes and the snack bar. Those workers turn over constantly, and the reason they leave is because the option of staying is just not much more enticing than their other options. Perhaps a single, hardworking mother can work at the alley for $7.25 an hour, and then slip $25 under the table to a neighbor for watching her kids. Or she can stay home with the kids, and perhaps get $25 for watching the neighbor’s kids. It comes out close to a wash. If a new job appears, or if the boss treats her poorly, she might as well leave.

But when workers leave, the bowling alley has to scramble. Everyone struggles to fill in for the vacant spots, and pretty quickly the facilities get run down and customer service suffers. Classic economics assumes the urgency for a qualified replacement would cause the company to pay a higher wage. But if the manager did that, the other workers would immediately demand higher wages too, so the alley continues with the vacancies. When they eventually find a good person willing to work at minimum wage, they are forced to spend significant time and resources on training.

Bayside Bowl in Portland, Maine, on the other hand, demonstrates how paying more can lead to more employment. They pay a decent wage and offer healthcare. No doubt this offer attracted higher-quality workers in the first place. But studies have shown that even the same workers are more productive when their wages rise—not just because they feel appreciated, but also because they have something to lose if they don’t work hard. Bayside has extremely low turnover by industry standards, with the majority of their staff having been on board for three or four years. When people do leave, the spots can be filled more quickly, and the stable staff can more quickly integrate and train newcomers.

So even if Bayside had fewer total positions because of the higher wage rate (it doesn’t appear to), it would still have more spots filled at any moment. At the same time, the increased productivity and efficiency of a full labor force is transferred into better customer experience, which leads to higher revenues for the company.

We should be raising the wage deliberately and consistently until we see negative employment effects. Then we can have the discussion about the appropriate balance between increasing earnings for low-income workers and decreasing job opportunities. For now, the research supports increasing the minimum wage, and we are missing a great opportunity to help low-wage workers help themselves without negative inflationary or unemployment effects.

Nonprofits have a special role in this debate as social justice thought leaders, but also as significant employers of low-wage workers. The Daily Show once mocked a local union’s picket of a Walmart for higher wages. The union used minimum wage non-union contractors because with limited resources, the crucial mission justified the means. As the Daily Show brilliantly pointed out, this argument is a farce. Nonprofits need to carefully consider their use of unpaid interns and low-wage contract workers. They should incrementally raise wages for their own employees, and they should be outspoken in the fight to raise wages as a starting point for fighting runaway income inequality.

This article was posted in its original form in the “Opinion” section of the Bangor Daily News online site.