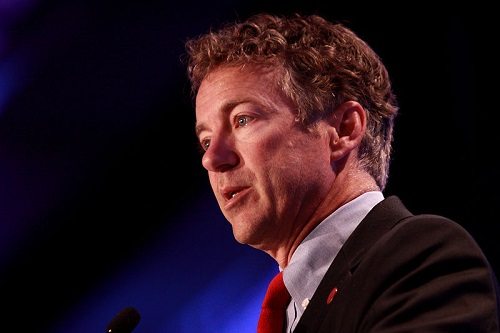 This is where Republicans go off the rails on social policy. Remember when President Reagan slammed public assistance using an anecdote of a woman in Chicago he dubbed a “welfare queen,” creating the nearly permanent impression among much of the public that there were millions like this woman bilking the system? While that one woman was real, the reality of public welfare was not one of fraudulent hucksters, but families who would have been beyond destitute were it not for their access to public assistance.

Now comes Rand Paul, putative presidential candidate, who has turned his attention to persons with disabilities. In a chat with potential voters at a diner in New Hampshire, Senator Paul made some choice comments about people who file for disability claims.

“You know the thing is that all of these programs—there’s always somebody who is deserving. Everybody in this room knows somebody who is gaming the system,” Paul said. “What I tell people is, if you look like me and you hop out of your truck, you shouldn’t be getting a disability check…You know, over half the people on disability are either anxious or their back hurts. Join the club. Who doesn’t get up a little anxious for work every day and their back hurts? Everybody over 40 has a back pain.”

This is why there are specialties in medicine. Senator Paul is an ophthalmologist, an eye doctor, trained to deal with eyeglasses, contacts, and vision-related medical conditions. Based on Paul’s diagnostic technique—whether one looks like him and hops out of a truck—it might not be wise for people suffering from back problems, anxiety issues, and many other disabilities to consult him for medical advice.

Paul later tried to walk back his comments with a statement released by his office:

“We absolutely should take care of those truly in need of help. But the system is broken, and when people can game the system, they are stealing from those who are truly disabled and won’t receive the care and aid they need. We must reform the system to ensure that those who really need help receive it.”

It didn’t work. He was quickly denounced by Alex Lawson, the executive director of the Social Security Works coalition, for “attacking Americans living with disabilities” and creating a “false crisis” that could be used to justify Social Security cuts. In an AP interview, Paul responded with this line: “They’re arguing for fraud…I’m arguing for eliminating fraud.”

Was Paul insinuating that Lawson advocates for fraud? Does he think that the nation is full of disability benefits kings and queens? If so, that’s a rather unkind cut, to say the least. Unlike the Reagan-era welfare queen, most persons with disabilities receiving Social Security payments aren’t raking in the dough; the average monthly benefit for disabled workers is a paltry $1,146. Reports from the General Accounting Office and from the Inspector General for Social Security both put the percentage of disabled beneficiaries receiving improper payments at about 0.4 percent, hardly evidence of a Social Security crisis of rampant fraud. Nonetheless, Paul is charging that half of recipients are gaming the system, and a week earlier, Texas Republican Sam Johnson described Social Security as “the fraud-plagued disability system.”

Dr. Paul the ophthalmologist seems to be motivated by the increasing number of people in the U.S. receiving disability benefits, which he perceives as likely due to people with minor back maladies claiming they can’t work. However, he might want to consider a different reason for the increasing number of disability beneficiaries. Kathy Ruffing of the Center for Budget and Policy Priorities suggested that demographics might be a more likely explanation:

“DI rolls have risen steeply over the last few decades, chiefly because of demographic factors — overall population growth, the aging of the baby boomers into their 50s and 60s (the peak ages for DI receipt), the rise in women’s labor force participation (which means more women now qualify for DI benefits), and the rise in Social Security’s full retirement age from 65 to 66 (which delays by a year the reclassification of DI beneficiaries as retired workers).”

Was Senator Paul simply speaking off the cuff while suffering from an extremely impolitic mental lapse, sort of channeling Mitt Romney’s devastating remark that 47 percent of the U.S. population would vote for Obama because they are dependent on government, view themselves as victims, and pay no taxes? Or was Paul, by floating his inaccurate remarks about disabled workers, doing his part to carry out a Republican game plan aimed at chopping away at Social Security? Or did Paul simply forget—or worse, ignore—that he was in the state where the governor, Maggie Hassan, happens to have a 25-year-old son with cerebral palsy and has been a longtime disability rights advocate? Whichever way it was, Rand Paul just dropped several levels in his credibility by attacking persons with disabilities.—Rick Cohen