Rebranding Sacramento through “The Art of the Dumpster” 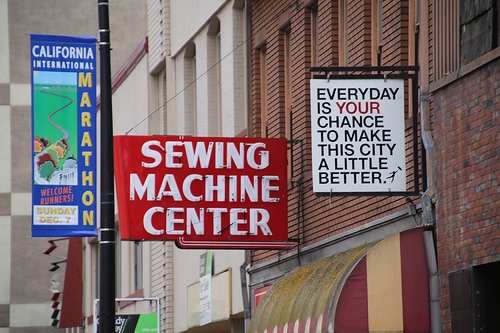 Some art just belongs in the dumpster. At least that was the theory behind Sacramento’s community art project to rebrand an overtly industrialized neighborhood. As the southeastern quadrant of Sacramento evolved over the years to welcome a multitude of different industries—recycling, mining, truck farming, warehousing—the community began to take the area back.

The Power Inn Alliance, a local coalition of business owners and property owners, brought together 10 artists to use the local dumpsters as a very unique canvas.

“What better thing to use as our canvas than our history? You see them all over the city, whether you’re in the best part of the city or the not great part of the city,” said Sally Freedlander, vice chairwoman of the Power Inn Alliance and the organizer of the art project. “With the help of the artists, we turn these boxes into works of art.”

Each artist found a different way of bringing out the potential of the metal box. While one has the image of the dumpster, another artist used the dumpster to create the look and feel of water. Each of the 10 dumpsters is being displayed as part of an exhibition entitled “The Art of the Dumpster.”

Freedlander says the dumpsters will most likely not return to their day jobs as trash receptacles. Rather, they will then be displayed throughout the Sacramento community.

“I hope that the people who live and work in this neighborhood can see their neighborhood in a fresh new light,” said Gioia Fonda, one of the artists. “I hope that they can maybe see that their whole corridor is a blank canvas waiting for things to happen on it.

As seen in the Sacramento community, public art does much more than beautify a community. After the struggling Flint, Michigan community was left devastated with 5600 abandoned homes, a parade through the city painted poetic encouraging words on the blighted homes in a similarly celebratory public art project. Whether the art is attracting new visitors, inhabiting a forgotten space or, like “Art of the Dumpster,” sprucing an existing space, in both the economic and aesthetic senses, public art is refectory. Cities that invest in art, will reap the benefits.—Shafaq Hasan