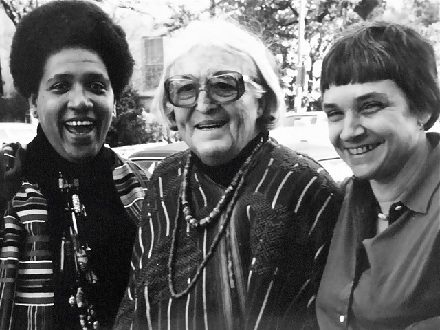 A voice and inspiration for the feminist movement and a staunch human rights advocate, the renowned poet Adrienne Rich died at age 82 on Tuesday. Rich had suffered from rheumatoid arthritis, which was regrettably the cause of her death, for a significant portion of her life.

Rich’s political activism and criticism of American ideals set her apart from other female poets of her generation. She was also well known for addressing the anti-war movement and gay rights, and influenced a generation of women poets and writers. Rich married Harvard economist Alfred H. Conrad in 1953 and had three children. By the 1960s, she had profoundly changed and left her husband in 1963. Conrad committed suicide one year after the separation, and six years later, Rich moved in with her long-term partner, Michelle Cliff. The content of Rich’s work became more provocative and controversial in the 60’s and 70’s, when she began addressing feminism, racism, and the Vietnam war.

She was also a superb essayist and is known for her powerful thinking on social issues, as partially exemplified by this passage:

“The mother’s battle for her child—with sickness, with poverty, with war, with all the forces of exploitation and callousness that cheapen human life—needs to become a common human battle, waged in love and in the passion for survival.”

Among Rich’s accolades were a Wallace Stevens Award, a Yale Young Poets prize, a MacArthur “genius” fellowship, a Ruth Lilly Poetry Prize, the National Book Award, and the National Book Critics Circle Award in 2004 for her collection entitled The School Among the Ruins. Rich, no stranger to ruffling feathers, is also remembered for famously refusing to accept the National Medal of the Arts in 1997. She explained her reasons in a sharply rebellious letter published in the New York Times: “A president cannot meaningfully honor certain token artists while the people at large are so dishonored.”

Rich taught remedial English to poor students entering college later in life, and then became a writing professor at Swarthmore College, Columbia University School of the Art and City University of New York.

NPQ will deeply miss Adrienne’s hard hitting feminist edge and moving poetry. Below, we include an excerpt from her acclaimed work, Diving Into the Wreck. –Aine Creedon

I came to explore the wreck.
The words are purposes.
The words are maps.
I came to see the damage that was done
and the treasures that prevail.
I stroke the beam of my lamp
slowly along the flank
of something more permanent
than fish or weed

the thing I came for:
the wreck and not the story of the wreck
the thing itself and not the myth
the drowned face always staring
toward the sun
the evidence of damage
worn by salt and sway into this threadbare beauty
the ribs of the disaster
curving their assertion
among the tentative haunters.

This is the place.
And I am here, the mermaid whose dark hair
streams black, the merman in his armored body
We circle silently
about the wreck
We dive into the hold.
I am she: I am he